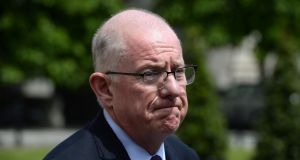 One of the most experienced TDs in the new Dáil, Charlie Flanagan was first elected to Leinster House in 1987 and served as both minister for children and youth affairs and, latterly, Minister for Foreign Affairs in the outgoing government. Following in the footsteps of his father and former minister for defence Oliver J Flanagan, he has been a mainstay in the Fine Gael parliamentary party for most of the last three decades, and served as spokesman for children and health prior to his appointment as a minister. A popular local politician, Flanagan was generally perceived to have performed well in both his ministerial portfolios since 2011 and largely avoided controversy apart from a tweet in 2014 in which he made reference to an offensive term. He later expressed regret over the incident. A native of Portlaoise, he is a qualified solicitor who graduated from UCD and the Incorporated Law Society of Ireland.