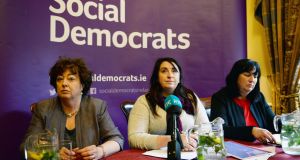 Catherine Murphy (Social Democrats) was first elected to the Dáil in March 2005 in the byelection to replace departing EU commissioner Fianna Fail’s Charlie McCreevy. She lost the seat in 2007 and regained it 2011. Born in Dublin, the 62-year-old lives in Leixlip with husband Derek Murphy. They have two children, a son and a daughter. Her full-time political career began when she became a member of the Workers’ Party on Kildare County Council in 1991, though she had been involved in local action campaigns since 1983. She represented Democratic Left and the Labour Party before becoming an Independent. In July 2015, she jointly founded the Social Democrats. Last year, her disclosures in the Dáil about the dealings between the Irish Bank Resolution Corporation, the former Anglo Irish Bank, and Siteserv, a company sold to businessman Denis O’Brien, raised her national profile.