Plain packaging on cigarettes and tobacco due in May 2017 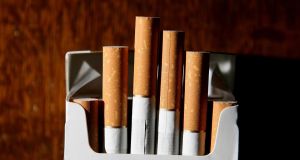 The Government has been adamant it will introduce plain tobacco and cigarette packaging despite threats from the tobacco industry of legal action and the loss of 87 jobs in Mullingar following the decision to close the Imperial Tobacco manufacturing plant. File photograph: Martin Rickett/PA Wire

Plain packaging on cigarette and tobacco products will come into effect in Ireland in May next year, Minister for Health Simon Harris has confirmed in the Dáil.

The Government has been adamant it will introduce plain packaging despite threats from the tobacco industry of legal action and the loss of 87 jobs in Mullingar following the decision to close the Imperial Tobacco manufacturing plant.

Health warnings with graphic images of the consequences of smoking will feature predominantly on packaging.

Mr Harris was speaking as he introduced the Health (Miscellaneous Provisions) Bill - an amalgam of measures to amend four pieces of legislation relating to different aspects of health.

The Bill amends six sections of the Public Health (Standardised Packaging of Tobacco) Act 2015 relating to the regulation of the appearance of tobacco packaging.

It will also reduce the ability of the packaging of tobacco products to mislead consumers about the harmful effects of smoking, the Minister said.

The Bill will allow the Minister prescribe “the colour of the outer and inner surfaces of tobacco packaging, the form and manner of barcodes and the manner in which a name may be printed on tobacco products”.

Board members will be paid €7,695 a year, resulting in an overall additional cost to the authority of about €61,560.

The Minister said some members might choose to waive their fee and he pointed out that the “One Person One salary” principle would apply to members of the board who are also in receipt of a salary from the public service.

Mr Harris said he was introducing the changes because “there is an onerous responsibility and significant time commitment placed on members of the authority and we wish to attract the highest calibre of people to apply to be members of such boards”.

A separate amendment to the Nursing Homes Support Scheme Act 2009 will mean that anyone applying for the nursing home Fair Deal scheme will not have to include for means testing certain ex-gratia payments received arising from Government decisions.

The legislation deals with four Government schemes including three linked to the Lourdes Hospital - the hospital’s Redress Board which involved 119 women; the hospital’s payment scheme which compensated women excluded from the Redress Board on age grounds, affecting 47 women; the Surgical Symphysiotomy Payment Scheme which made awards to some 400 women and payments made by the government or the German Contergan Foundation to 32 Irish survivors of thalidomide.