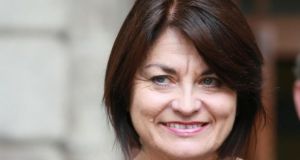 Independent Senator Fidelma Healy-Eames has suggested that passing the marriage equality referendum could lead to the end of Mothers’ Day.

Independent Senator Fidelma Healy Eames has suggested that passing the marriage equality referendum could lead to the end of Mother’s Day.

In a tweet, she said: “Happy mothers’ day all! Hope we can continue to celebrate it after ssm passed. In some US states, mothers and fathers’ day banned.’’

Ms Healy Eames, who later conceded the ban was at school level, has yet to say publicly how she will vote in the referendum.

She broke with Fine Gael when she voted against the Protection of Life During Pregnancy Bill and was associated with fellow Independent TD Lucinda Creighton’s previous Reform Alliance grouping.

A native of Oranmore, Co Galway, Ms Healy Eames announced last month she would not be joining Ms Creighton’s new party, Renua Ireland, and said she would stand as an Independent in Galway West in the next general election.

Happy Mothers' day all! Hope we can continue to celebrate it after #SSM passed. In some US states Mothers & Father's Day banned #pcgonemad

Meanwhile, Atheist Ireland has said it unequivocally supports a Yes vote in the referendum.

“We support the equal right of all citizens to choose to marry the person they love,’’ it added.

“Atheist Ireland believes that public policy and the civil law should be informed by ethical secularism, rationality and the reasoned consideration of evidence.’’

The State, it said, should not legislate based on faith, revelation, superstition or prejudice. “The Constitution should not reflect the views of any particular religion,’’ it added.

“It is significant that this progressive step should happen in Massachussetts, which was the first US state to enshrine marriage equality in law when it legalised same-sex marriage 11 years ago,’’ she added.

“Since that pioneering move, more than 30 other US states have followed suit in legalising gay marriage.’’