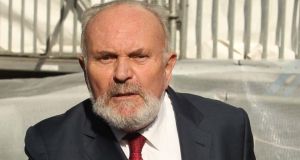 Senator David Norris: “We need real reform to include the other seats.” Photograph: Stephen Collins.

Senator David Norris (Independent) accused the Government of cynicism and dishonesty in its attempts at reform.

Mr Norris was referring to an Irish Times report that the National University of Ireland and Trinity College Dublin constituencies, which account for six seats, will be abolished under a plan to give all third-level graduates a vote in Seanad elections.

A Bill is expected in the Oireachtas before Christmas, but Seanad leader Maurice Cummins said he had no indication of when the Bill would be introduced and certainly none that it would be before Christmas.

“We need real reform to include the other seats,” Mr Norris said. Describing the university panels as the only democratic element of the Seanad, he said they had 200,00 voters. This would “increase to 500,000 while the political panels in the control of political parties will have their vote base reduced from 1,000 to 500 because of the diminution this wonderfully democratic Government is inflicting on local authority membership”.

Under recent legislation, a number of town councils will be abolished, cutting hundreds of council seats.