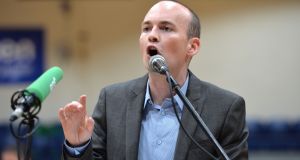 Paul Murphy makes his a speech after winning the Dublin South West byelection at the count centre in the Basketbal Arena in Tallaght. Photograph: Alan Betson/The Irish Times

Paul Murphy’s victory in the Dublin South West byelection was a master stroke in political tactics and timing.

Murphy, a former Socialist Party MEP, did not appear to be a huge threat to the favourite, Sinn Féin’s Cathal King, when he entered the race last July. It appeared initially as if he was no more than a minor irritant to a party with a strong base in the constituency and an experienced councillor as its candidate.

Sinn Féin also had a sitting TD in the four-seat constituency, Sean Crowe. Labour had two sitting TDs Pat Rabbitte and Eamonn Maloney, but the heady days of the 2011 general election, when the party secured over 36 per cent of the vote, were over. Fianna Fail had no seat in what was once a stronghold.

Sinn Féin, it seemed, was rampant and unassailable. This appeared to be confirmed in last week’s Irish Times/Ipsos MRBI poll when the party equalled Fine Gael’s national rating of 24 per cent.

Few had reckoned with the Murphy strategy of managing to turn the byelection into a referendum on the controversial water charges. And, in a clever political move, he did not run as the Socialist Party candidate, opting instead for the Anti Austerity Alliance (AAA) brand which would be better received on the doorsteps.

There was widespread apathy among voters. Having gone to the polls in May in the European and local elections some voters wanted a break from electoral politics. Others were disinterested because the result would make no difference to Dail arithmetic. And there was the general disillusionment with politics and politicians.

Concentrating on the water charges, Murphy claimed that Sinn Féin was soft on the issue of a boycott of the charges.

Sinn Féin received a setback in the run-up to polling day when deputy leader Mary Lou McDonald apologised to Murphy over a fake Facebook posting suggesting he was being dishonest on the issue. Denying the party had anything to do with it, she said it was a mistake pure and simple. But some damage was done.

By polling day, many voters were motivated to turn out because of anger over water charges. The result showed that Murphy had won the argument and the seat.