Miriam Lord’s week: “I remember a time when ministers were fired for the smallest leak” 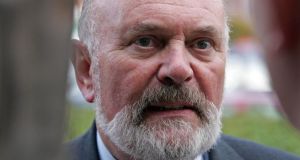 Senator David Norris on Budget 2017: “I think it is a complete and utter waste of time. It has been leaked for weeks.”

David Norris spoke for many on Tuesday afternoon after Michael Noonan and Paschal Donohoe performed the traditional reading of the budget leaks into the Dáil record.

“I must say I’m bored senseless by the budget,” said the university senator. “I think it is a complete and utter waste of time. It has been leaked for weeks. I remember a time when cabinet ministers were fired for the smallest leak . . . We would have been better off with no budget at all. Let the country continue and let it recover. The housing grant is completely mad. It is back to the crazy days of 2008.”

Norris stayed in the Seanad chamber to listen to the rest of the contributions, presumably too bored to move.

He was glad he did, because Sinn Féin’s Trevor Ó Clochartaigh cheered him up.

“I think it’s ironic that we can see there’s a pay increase for the Taoiseach, for the Ministers, for TDs and Senators that’s going to be announced,” he said, prompting an exasperated Jerry Buttimer to jump in with a clarification.

“That is not in the budget,” said the Fine Gael Leader of the House. “Deal with the facts, don’t be spreading rumours. There is nothing in the budget for that.”

Norris perked up. Did somebody mention a pay increase? “What are we getting? How much is it?” he asked, looking around at his colleagues.

James Reilly replied. “I thought you were bored with the budget.”

“The childcare initiatives – I can see Minister Zappone’s hands all over it. Give it to everyone who’s out at work, by all means, but do everything you like to undermine the family – the family unit must be nearly alien now. The stay-at-home mother and stay-at-home father, they must be supported. They can’t get a bob in childcare . . . We’ll find out in years to come that maybe farming out children to full-time care is not the best solution that we ever got.”

The Tipperary TD said he had an interest in childhood matters, having been involved in setting up and running a pre-school naíonra in his area.

“I have a big family myself, I know totally what I’m talking about,” he said. He added, “Deputy Cassells is probably embarrassed by some of the things I’ve said.”

The Meath West TD hit back later in the evening.

“Perhaps the most derogatory statement I ever heard was uttered in this Chamber this afternoon when Deputy Mattie McGrath said that parents may come to regret ‘farming out’ their children in years to come. What a disgusting and Neanderthal statement to come out with.”

And it had all been so nice before that.

Mick nodded, with a smile.

“I might be,” he replied, cocking a finger to his right, “with this quare one”.

Clare, TD for Dublin Fingal, leaned forward and responded on behalf of her comrade in arms.

“ Yes, thank you very much, a Leas-Cheann Comhairle,” she giggled. “That’s right, yeah.”

And the quare one giggled again. A touching moment.

There was a big family wedding in Donegal yesterday – political family, that is.

Congratulations to Fianna Fáil’s leader in the Seanad Catherine Ardagh, who married local man Darragh McShea in St Patrick’s Church, Ballyshannon. McShea is deputy general secretary of Fianna Fáil and tipped by many to succeed headquarters boss Seán Dorgan when he eventually moves on.

It was a bittersweet day for the first-time Senator, who was walked up the aisle by her mother Maura. Her father Seán, a Dublin South Central TD for 14 years, died in May after a long illness.

The reception was held at Harvey’s Point on Lough Eske.

We don’t know if Micheál, who longs for that big day of his own when he might become taoiseach, caught the bouquet.

It won’t have been for the want of trying.

Audacity of ‘Hope’ in the face of winged bombers

Two distinguished individuals – one an award-winning president and the other a Minister – stood chatting in the Leinster House car park on Wednesday.

But Senator Ned O’Sullivan was alive to the danger.

Author Colm Tóibín, who is president of Listowel Writers’ Week, and Minister for the Arts Heather Humphreys looked startled, and then to the skies.

But Ned, a noted authority on the scourge of “seagulls losing the run of themselves”, wasn’t worried about them. He was more concerned about the beautifully printed texts on handmade paper that lay spread across the boot of his car for their perusal.

The three were marking the publication of Hope, a limited edition portfolio of original pieces on the theme from Tóibín, Eavan Boland, Anne Enright, Brendan Kennelly and Jennifer Johnston. The texts are accompanied by a Donald Teskey print depicting the beauty of the Kerry coastline.

The collection is limited to 100 copies, all signed by the writers and artist. Printed by Stoney Road Press Fine Art Print Studio in Dublin, it costs €1,000.

“It’s to raise funds for Listowel Writers’ Week,” said Tóibín. “And it’s also just to show that we’re not always looking for handouts.”

Humphreys, meanwhile, was looking a bit dazed, and it wasn’t all to do with the quality of the artwork and prose.

As she had arrived for the photocall Tóibín bounded up to the plinth to greet her, grasping her warmly by the hand.

“The increase for the Arts Council is great. We’ve very happy with it!” he gushed.

We haven’t seen Heather look so shocked since the day Enda Kenny gave her a seat in Cabinet.

Surprise! Harris has only just turned 30

Surefooted Simon Harris is rarely caught for words, but he was stopped in his tracks last night when his fiancee Caoimhe threw a surprise party to celebrate his big three-O.

What? Thirty, you say? But he’s been around forever.

The Minister for Health is probably in need of some TLC this morning after last night’s birthday bash. Family and friends gathered in Bray’s Harbour Bar to spring their 8pm surprise.

We hear the young(ish) Simon, who was 24 when first elected to the Dáil, was flabbergasted when he arrived.

Backbenchers Noel Rock and Kate O’Connell joined the Harris clan in the famous quayside hostelry, which was named Best Bar in the World by Lonely Planet in 2010.

How did the guest of honour react when he walked in and saw everyone? Harris could have done worse than his famous reaction during a particularly heated PAC meeting: “Chillax – I think everyone needs to take a step back here.”

*This article was ammended on October 17th.