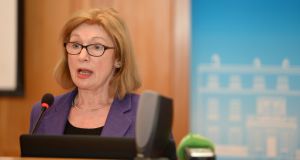 Minister for Education Jan O’Sullivan has rejected calls for the proposed merger of institutes of technology not to go ahead without the agreement of staff trade unions. She said the problem with the measure “is that the terms must be agreed with the staff trade union, and that is in effect a veto”.

The row was over the Technological Universities Bill, which provides for the potential merger of up to 10 of the State’s 14 institutes of technology bidding for a technological university designation.

Seven votes were taken on the Bill during a debate in which the Opposition called for the agreement of unions to be included in the legislation’s provisions. Ms O’Sullivan agreed that “we need full consultation, and that is why we have repeatedly stated to the institutes that they must engage meaningfully with those who work in them”.

As the Teachers’ Union of Ireland (TUI) prepares for a one-day strike next week over what it calls chronic underfunding of the third-level sector and the precarious position of many teaching staff, it also called for a postponement of the Bill, which it claimed contained threats of rationalisation.

The Minister said there had to be normal negotiations. She had met union representatives in Cork this week and had taken on board some of their views.

“However, stating that the merger cannot go ahead without their agreement is taking the normal relationships with trade unions to an extent that would not be proper to put in the primary legislation,” Ms O’Sullivan said.

Sinn Féin education spokesman Jonathan O’Brien, who introduced several amendments, pointed to the Minister’s comments that it was not credible to give any one stakeholder a veto.

“However, the Government has given vetoes to other stakeholders in other Bills,” he said, as in “the veto we have given to banks on personal insolvency”.

“However, during the past seven years, €190 million has been taken out of the sector, lecturer numbers have decreased by nearly 10 per cent and student numbers have increased by 35 per cent, which equates to more than 21,000 extra students,” he said.

He added that the Minister “cannot blame those who are being asked to do more with less resources for questioning whether the process is a case of rationalisation”.

Debate on the Bill continues.