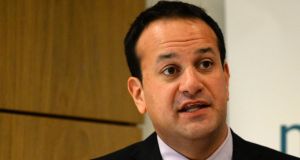 Minister for Health Leo Varadkar: he insisted the scheme had brought about an end to years of uncertainty and costs for the women

Minister for Health Leo Varadkar has refused to intervene in the Government scheme for survivors of symphysiotomy following claims that it is adversarial and demeaning.

Mr Varadkar said the assessor in the scheme, former High Court judge Ms Justice Maureen Harding Clark, was appointed to act as an independent adviser. “That is why I will not attempt to go over her head or overrule her,” he said.

During questions in the Dáil, Sinn Féin health spokesman Caoimhghín Ó Caoláin claimed serious shortcomings in its operation, “including the disbelieving disposition of its principal and the confrontational and interrogational operation of the process”.

A number of survivors of symphysiotomy, a procedure involving cutting the pelvic bone to create more space during childbirth, sat in the public gallery during question time.

But Mr Varadkar insisted the scheme had brought about an end to years of uncertainty and costs for the women.

He said it was designed to be simple, straightforward and non-adversarial and aimed to minimise stress.

Mr Ó Caoláin said the former judge had described women as “making a full recovery over a relatively short period of time and with no continuing ill effects. Neither of these claims stands up to Irish or international scrutiny.”

The Minister pointed out that the scheme was voluntary and participants could withdraw at any time.