Hogan denies water charges could end up costing €1,000 per household 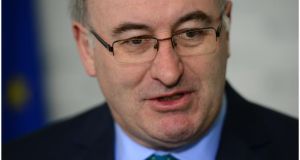 Minister for the Environment Phil Hogan accused Joe Higgins of ‘picking figures off the top of his head’. Photograph: Bryan O’Brien

Minister for the Environment Phil Hogan denied that water charges could eventually cost over €1,000 per household.

He was replying to Socialist Party TD Joe Higgins, who accused the Government of being more interested in introducing another local tax rather than conserving water. “Along with property tax, water charges will increase to over €1,000 per household, an intolerable burden for many families.’’

Mr Hogan accused Mr Higgins of picking figures off the top of his head. “The sum of €1,000 per family is way off the mark and he knows it.’’

When Mr Higgins suggested the figure was very realistic, the Minister insisted it was ridiculous. “The deputy was wrong about the local property tax figure and the bin charges in the past, and he is wrong now.’’

Quality water
The Minister said people were paying through taxes for the treatment of quality water at a cost of €1 billion.

He said he was not in a position to say what funds would be made available for the water metering programme because the Government was in the final stages of a tendering programme for regional contracts, which would roll it out to 1.1 million households.

Plumbing jobs, he added, would be created, with 25 per cent of employed persons assigned to complete their apprenticeships or from the unemployment register.

Fianna Fáil spokesman Barry Cowen said there was still no countrywide audit to further determine the cost of repairs to put the system right before there were charges for water. The job creation was commendable if actions matched rhetoric.

Mr Hogan said there would be a substantial amount of economic activity and creation of jobs.

HSE says all 2m flu vaccines ordered will arrive on time 14:40
People asked not to cross Border as Donegal prepares for Level 3 restrictions 14:39
Covid-19: Taoiseach warns of restrictions in Ireland’s cities as hospital cases pass 100 13:57
Father speaks of ‘great courage’ of murdered daughter as man convicted 13:46
Minister says ‘rules apply to everyone’ after MP pictured on train without mask 13:16