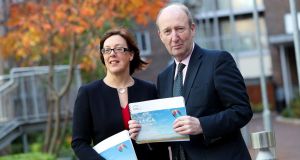 The transfer of governance of Dún Laoghaire harbour company to the local council is imminent, Minister for Transport Shane Ross told the Seanad.

He said he understood the company and Dún Laoghaire-Rathdown County Council had established transitional teams which were working on the practical issues associated with the transfer.

He said officials from his department had met both sides on a number of occasions to assist in the process. “I have also met with many local groups,’’ he added.

Mr Ross said the company faced a challenging financial and operating environment as it moved from commercial shipping activities towards a different operating model, with the focus on marine leisure and marine-related tourism.

Stena Line’s departure from Dún Laoghaire harbour added to the future challenges to the company. “The financial impact on the port is significant and it is very clear that the company faces a very different operating environment than it faced in the past,’’ he said.

“The company has been restructuring its business in order to remain on a sustainable financial footing and to enable the harbour to develop and operate on a commercial basis into the future.’’

The Minister was replying to Independent Senator Victor Boyhan, who said there were 250 acres of water in Dún Laoghaire harbour, making it an amazing international maritime resource.

Mr Boyhan said there was huge uncertainty about the harbour’s future, its direction, long-term plans and governance.

There had been an acting harbour master for several years, and there were huge issues regarding the pension fund, he said. There were also human resources, and legal and real estate issues.

Mr Boyhan said he understood the company had never issued a dividend to the State. “All is not plain sailing at Dún Laoghaire harbour and I think the Minister knows that. We need answers.’’