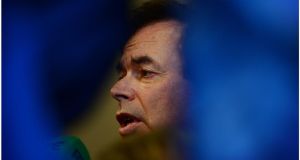 The issue of privacy needs a “longer and wider” discussion and might be addressed by an Oireachtas committee, Tanaiste Eamon Gilmore has told the Dail.

He said it was “certainly my view that issues that the Garda Siochana are dealing with should not come out into the public domain unless there is an actual charge or whatever, either through media or any other way.”

Answering questions about the ongoing controversy over penalty points and comments by Minister for Justice Alan Shatter about Independent TD Mick Wallace, Mr Gilmore also insisted he had confidence in the Minister, in the Garda Commissioner and the Garda Siochana.

Fianna Fáil leader Micheal Martin, said in his statement and comments to the Dail last night Mr Shatter had not apologised to Mr Wallace over his remarks on RTE’s PrimeTime that the Wexford TD had received the benefit of Garda discretion after being seen using a mobile phone while driving.

Mr Gilmore, expressing his support for the Minister for Justice said he had made a statement to the Dail and answered questions. “He apologised and said he was sorry. And frankly I think you should accept that,” he said to Mr Martin.

He told the Cork South-Central TD “its important we get a little perspective here.” He said there were allegations made about serious corruption in the penalty point system and these were taken up by a number of TDs.

Mr Gilmore said the Minister addressed the issue, treated it seriously and had it investigated. This showed no question of criminality or corruption.

Mr Martin insisted however that Mr Shatter had refused to answer questions. “He didnt apologies and he stood over the misuse of private information. The Taoiseach is 100 per cent supporting him and you are.”

He accused Mr Gilmore of giving the Minister “carte blanche”.

The Fianna Fáil leader said “what has happened since this issue has been raised is not pretty - one Deputy being handcuffed and ending up in a prison cell......irrespective of whether you are uncomfortable by the issues raised by the Deputies.”

Mr Gilmore insisted the Minister had addressed the issue and apologised and he said an Oireachtas committee could deal with the issue of privacy.

United Left Alliance TD Clare Daly said however the Tanaiste had chosen to repeat a false assertion, that claims made by the Opposition did not stack up even under the Gardas own inquiry.

Ms Daly said she had named a judge in the House. The investigation found that judge had verbally petitioned the Garda and got three points written off. The reports said there was not an adequate paper trail on that basis.

She said that “any convictions taken on foot of a prosecution by that garda in front of that judge are now unsound.”

“We were told after the Morris tribunal that those who wanted to report malpractice would be protected by the new confidential recipient situation. The present debacle really exposes that as being a sham.”