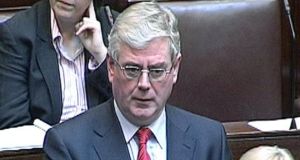 Tánaiste Eamon Gilmore told the Dáil: ‘I am truly sorry for the loss and suffering that both families have endured’.

Tánaiste Eamon Gilmore has reiterated the Government’s apology to the families of the two RUC officers killed in 1989 as they crossed the Border after a meeting at Dundalk Garda station.

Mr Gilmore said he wanted to put it on the record of the Dáil: “On behalf of the Government and people of Ireland I apologise without reservation to the Breen and Buchanan families for any failings identified in the report on the part of the State or any of its agencies.

“I am truly sorry for the loss and suffering that both families have endured.”

He was speaking after the publication of the Smithwick report which concluded there was Garda collusion in the killing of chief superintendent Harry Breen and superintendent Bob Buchanan.

Mr Gilmore said he was “appalled and saddened” by the tribunal’s findings.

He acknowledged the “dignified manner in which the Breen and Buchanan families had responded to publication of the report” and thanked Judge Peter Smithwick for producing such an “open, honest and comprehensive report”.

He said they should recall the human dimension of this atrocity of “two outstanding RUC officers”.

He told a silent Dáil: “Where allegations of collusion by agents of the State were concerned, we have long agreed that the State bears a particular and solemn responsibility.”

The Tánaiste added the Oireachtas “has been consistent and unflinching in its demand for and pursuit of the truth in relation to the allegations of collusion identified by the British and Irish governments at Weston Park in 2001”.

He will meet the North’s Justice Minister, the Garda Commissioner and the Chief Constable of the PSNI shortly to discuss the report.

“We need to see completion of all the work that was committed to at Weston Park.” Mr Gilmore also said he had contacted his British counterpart about the need for an inquiry into the killing of Belfast solicitor Pat Finucane.

The fact that the Smithwick tribunal had been completed would strengthen the Government’s position on that, he said.

Fianna Fáil leader Micheal Martin said the publication of the report vindicated the establishment of the inquiry in the first place.

It highlighted other aspects of the Weston Park agreement particularly the Finucane, Hamill, Nelson and Dublin and Monaghan bombings should be pursued vigorously by the Government.

But Mr Gilmore said “today isn’t a day for self justification by any political party”. It was a day to reflect on the two officers.