Taoiseach and Gerry Adams debate allegations regarding sexual abuse by members of the Provisional Republican Movement. 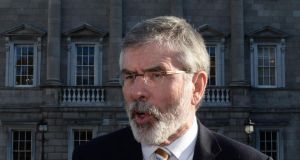 In his speech in the Dáil today Sinn Féin leader Gerry Adams hit out at the Government, accusing it of hypocrisy in dealing with the issue of sexual abuse. Photograph: Dara Mac Donaill/The Irish Times

Sinn Féin leader Gerry Adams has accused the Government and Fianna Fáil of holding a five-hour debate on allegations of sexual abuse by republicans “on a whim” and for electoral purposes.

He again rejected allegations of a cover-up and said the IRA investigation had been recast as “a cover-up by Sinn Féin and then from that into a charge that we facilitated sex abusers. I reject these charges. They are not true.”

The debate arose from allegations by Belfast woman Maíria Cahill of rape by a republican and being forced to confront her attacker in a kangaroo-style court. Ms Cahill sat in the public gallery during the debate.

He said he had received information anonymously from a republican “in relation to these matters”. He said that “while I cannot vouch for it, neither do I doubt its authenticity. So I have passed this information to An Garda Síochána. ”

He named in the Dáil the people involved in dealing with Ms Cahill - Padraic Wilson, Seamus Finucane, Briege Wright, Maura McCrory, Sue Ramsey and Jennifer McCann - and said they had been subjected to “trial by media”.

Mr Adams said: “These are all decent people and upstanding Irish citizens.”

In his speech the Sinn Féin leader hit out at the Government, accusing it of hypocrisy in dealing with the issue of sexual abuse.

He rejected Taoiseach Enda Kenny’s claim during the debate that the Government had done more for children than any other in the history of the State.

Mr Adams said that when it came to supporting the victims of domestic violence and rape, “this Government has an appalling record. Since you’ve assumed office in 2011, funding for rape crisis centres, women’s aid refuges and other support groups have been slashed.”

The Government promised it would introduce consolidated domestic violence legislation to protect victims. “Almost four years after you were elected that hasn’t happened. You have failed to sign up to the European convention on preventing and combating violence against women and domestic violence.”

He also said a “succession of damning reports all exposed the extent to which the Catholic hierarchy and successive governments of Fianna Fáil, Fine Gael and Labour parties were involved in the institutional abuse of tens of thousands of children over decades, or the cover-up of this abuse”.

Ceann Comhairle Sean Barrett warned him to be very careful about making such charges.

Mr Adams said he wished Ms Cahill well. “I hope she gets justice and that her alleged abuser is brought to justice.”

Referring to the case involving the abuse of his niece Áine Tyrell by his brother Liam Adams, the Sinn Féin leader said he and his family “deeply reject the continuous taunts and offensive commentary by some here about what was for our family a deeply traumatic episode in our family life”.

He was repeatedly told that anything said in the Dáil should not be taken personally but “there is nothing more personal than the remarks some of you have made here”.

Ruth Coppinger (Socialist Party) said the action of Sinn Féin and the IRA in the treatment of Maíria Cahill, both then and now, was reprehensible.

It was clear, she said, that when Sinn Féin was faced with serious allegations, the party had moved at the expense of the victim to cover up and circle the wagons.

Finian McGrath (Ind) said the theme of the debate should be about the victims and the urgent need to support them in a compassionate, caring and professional manner.

“The victims and the survivors have to be the priority and they must get the support of all members of the House, regardless of politics,’’ he added.

Maureen O’Sullivan (Ind) said it was important to acknowledge the bravery of Maíria Cahill, because some victims were afraid to speak out. “There can be no protection of those who rape,’’ she added.

Minister for Justice Frances Fitzgerald said abuse occurred in religious dioceses and congregations, in institutions, both religious and state-run, and in sporting organisations. “In the UK we have seen how sex abuse prevailed in showbusiness circles. Now, thanks to very public and courageous effort by one Belfast woman, Maíria Cahill, we know that sexual abuse occurred in circles of the republican movement.”

She said that “in the case of the IRA, we do not know what happened to abusers who were moved across the Border. We do not know if high-risk sex offenders have been resettled across the border, unknown to civil authorities, posing a lingering threat to children.”