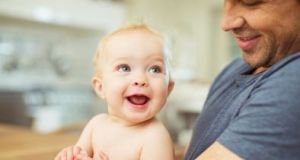 Prof Kevin Nugent, founder of the Brazelton Institute in the Division of Developmental Medicine at Boston Children’s Hospital, said “sensitive care” in the first weeks of life are essential to development of “a happy, well adjusted person”. File photograph: Getty Images

The first 1,000 days of life shape how a person deals with adversity, friendships, success or happiness in later life, according to eminent Irish-American academic Prof Kevin Nugent.

The faculty member at Harvard Medical School told the Oireachtas Committee on Health and Children “the process of building the brain is not genetically determined”, adding “the first 1,000 days are crucial to brain development”.

The professor’s comments are to be analysed by the committee in the new year as politicians debate early years strategies for children.

Prof Nugent, founder of the Brazelton Institute in the Division of Developmental Medicine at Boston Children’s Hospital, said “sensitive care” in the first weeks of life are essential to development of “a happy, well adjusted person”.

Isolation and neglect, dysfunctional environments and abuse have significant effects on a person’s mental health in later life, he said. “We think they don’t notice, but babies notice everything.”

“I have seen a six-week-old baby with all the symptoms of depression,” he said, instancing a case of a child who went from lively to listless when placed in isolation.

“When a baby feels its biological needs are not going to be met,” he or she “don’t build trust that the world will provide necessary support,” he said.

Prof Nugent said babies’ brains doubled in size in the first year and more synapses - crucial neural pathways in the brain - were being developed at this time than any other time in life.

It was also a vulnerable time, and exposure to negative environments “can change the structure of the brain”, he told the committee.

“The key thing the child has to feel is valued, worthy of love, so that by the end of the second year of life the child has that individual sense of self, sense of being valued as a person, that would be our goal,” he said.

Health and Children committee chairman Jerry Buttimer said “in Ireland we were slow coming to the table with our early years strategy, something I know as a former teacher”.

But he said, “at least childhood development, which is so important, is now on the agenda, so even if there is a new Dáil the issue is open”.