Senator Jerry Buttimer ‘happy that we, as a country, can allow all of us to get married’

Jerry Buttimer was congratulated on the announcement of his engagement to his partner Conchobar Ó Laoghaire, by Leas–Cathaoirleach and Kerry Senator Paul Coghlan and all other 22 Senators during Order of Business. Video: Oireachtas TV 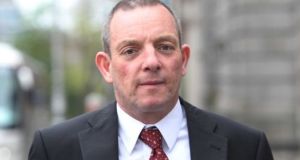 There was an emotional moment in the Seanad on Tuesday when House leader Jerry Buttimer was congratulated on the announcement of his engagement to his partner Conchobar Ó Laoghaire.

The Cork Senator, who was Fine Gael’s only openly gay TD in 2015 before Taoiseach Leo Varadkar came out in advance of the marriage equality referendum, was serenaded with good wishes from all Senators in the House.

But Leas–Cathaoirleach and Kerry Senator Paul Coghlan became emotional as he congratulated his Cork colleague on his good news.

Mr Coghlan’s voice broke when he told Mr Buttimer: “I want to wish you every happiness on your important announcement today.”

I’m sure we’ll have the opportunity to celebrate suitably in due course,” he said.

All 22 Senators who spoke on the order of business congratulated Mr Buttimer after Fianna Fáil Seanad leader Catherine Ardagh alerted them to the news of Mr Buttimer’s engagement.

Independent Victor Boyhan said, “I know it is a very special time for him” and described Mr Buttimer as “an exceptionally popular member of this House”.

Sinn Féin leader Rose Conway-Walsh wished Mr Buttimer and his partner “every happiness and good luck with their wedding plans. It was a joy to hear that good news on the radio this morning.”

Labour Senator Kevin Humphreys, wishing the House leader every happiness, said “it’s great to see the results of the referendum on marriage equality here in the Republic”.

He said “it is to be hoped marriage equality will come shortly to every part of the 32 counties, where every citizen will have the right to have his or her love acknowledged”.

Mr Buttimer thanked everyone for their good wishes and said, “I am happy that we, as a country, can allow all of us to get married”.