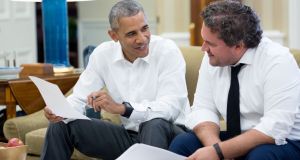 The three-day event, which runs from September 7th-9th, will feature talks from experts in Irish and US politics with a particular focus on Brexit and Ireland’s relationship with the US.

Cody Keenan, christened “Hemingway” by former US president Barack Obama, will speak about his experiences as director of speechwriting for Mr Obama, while Bob Shrum will reflect on his involvement in the Edward Kennedy presidential election campaign. Mr Shrum will also speak about his life as a senior Democratic political strategist over five decades.

Ian Paisley Jnr, MP for North Antrim and son of the late Reverend Ian Paisley, will speak about his involvement in the Peace Process, his work on the Northern Ireland Policing Board and will reflect on his father’s political career and decision to enter government with Sinn Féin. Mr Paisley Jnr will also discuss the prospects for Northern Irish politics and the restoration of the power-sharing government.

This year’s festival will also feature a panel of historians who will assess the legacy of former US president John F Kennedy, 100 years on from his birth.

A total of 35 speakers will take part in the summer school including former taoiseach Bertie Ahern and former leader of the SDLP Mark Durkan who will discuss Brexit and borders. A second Brexit-themed session on budget and better politics will include contributions from Fine Gael Minister Regina Doherty, Sinn Féin’s Mary Lou McDonald, Joan Burton from Labour and Lisa Chambers from Fianna Fáil.

Tickets on sale from kennedysummerschool.ie