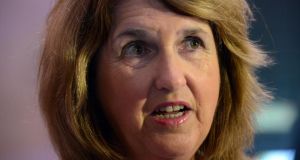 
Fifteen companies have been banned from the Government’s JobBridge work experience scheme for replacing paid employees with unpaid interns.

Minister for Social Protection Joan Burton revealed the figures as claims were made in the Dáil of “widespread abuse” by private companies who displace existing employees and take on unpaid interns whose social welfare and an extra payment of €50 a week are paid by the State.

The scheme aims to encourage job creation and incentivise employers to take on interns for six months with the possibility of a full-time job afterwards. The intern receives €50 from the State in addition to their social welfare payment and the “host” company does not have to make any further payment but is required to train and upskill the intern.

The Dún Laoghaire TD quoted one of the employees, Brian, who said he worked for the company for almost two years and was given four days’ notice. “Now there is an intern doing my job,” he was quoted as saying. “This intern is being paid from the Department of Social protection and I had to sign on too, costing the State an extra €238 every week while Oxigen are laughing all the way to the bank.”

But Ms Burton said she expected a report on the investigation of the complaint to be completed shortly, insisted such complaints were taken seriously, and pointed to “intensive monitoring” of the scheme.

She stressed she would “not tolerate such behaviour” and said in a period when 13,500 people were on internships there were 1,700 monitoring visits, 275 complaints and 15 “host organisations” were excluded from the scheme.

Mr Boyd Barrett called for prosecution of firms that abused the scheme and said the Minister had also been informed of “many other instances” including “checkout jobs in Donegal and jobs in SuperValu being filled with intern places”.

He cited furniture firms in Waterford “that close down one week, make people redundant, tell them to depend on the insolvency service to get their redundancy and re-open the next week doing the same job with interns in the jobs of the employees they had let go”.

He criticised what he considered the delay in dealing with the complaint against Oxigen, which had been made on March 21st. But Ms Burton said it was “appropriate to give an opportunity for the matter to be examined. I do not want to say anything else about a specific case for reasons I believe the Deputy would appreciate.”