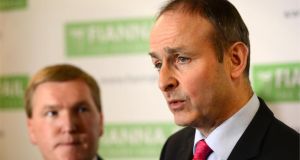 Fianna Fáil is to allow a free vote on the abortion legislation in the Dáil and Seanad.

The move came after a meeting of the parliamentary party could not reach a unified position on the deeply contentious issue.

Party leader Micheál Martin has strongly advocated backing the Government’s Protection of Life in Pregnancy Bill 2013 saying it was “pro-life”.

However, many members of the party have disagreed including the party’s finance spokesman Michael McGrath who called for a free vote on the grounds of conscience.

Mr Martin’s difficulties were compounded by a motion at the party’s Árd Fheis opposing suicide as grounds for abortion.

In a statement Mr Martin said he had been the one to propose a free vote after a “comprehensiveand respectful discussion among the Parliamentary Party over recent weeks and months”.

Mr Martin acknowledged that his preference was for the party to take a unified position on it but that was not possible because of “genuine and deeply held convictions on both sides”.

He added: “ In response, my view was that the most appropriate course of action was to respect these differences of conscience and allow colleagues to vote on that basis.

“Despite the different perspectives on elements of the Bill, the Parliamentary Party reaffirmed our commitment to protecting the lives of pregnant women in this country, expressed our ongoing commitment to Article 40.3.3 of Bunreacht na h’Éireann and restated our determination not to seek to party political advantage from this issue.”

The move may increase the pressure on Taoiseach Enda Kenny whose party has many backbenchers seeking a free vote on the issue.

Earlier this week, Mr McGrath warned that the situation had become very difficult for many Fianna Fáil TDs and Senators if a party whip was imposed.

“There are very divergent views within the parliamentary view on the issue. I think that’s no secret at this stage. I suggested at the last meeting that we should consider allowing people the right to vote in accordance with their conscience, to allow people a free vote on this issue,” Mr McGrath said.

Meanwhile Taoiseach Enda Kenny has dismissed claims from a senior Vatican official that politicians should resign rather than support Ireland’s abortion laws.

A monsignor in Rome called for TDs and Senators to quit as he drew parallels between the contentious reform and Nazism. But the Taoiseach hit back, warning Catholic hierarchy that it should not interfere in Irish Government business. “I’m a Catholic and I don’t interfere in the messages of the church. I have no comment to make on what the cardinal from the Vatican says,” Mr Kenny said.

“I set out very clearly what it is we have to do in terms of our constitution and the law, and that’s to provide clarity and decisiveness. This is about saving lives, not ending them.”

As the Government pushes ahead with plans to legalise abortion where there is a threat of suicide by July, Monsignor Jacques Suaudeau gave an interview to the Irish Catholic newspaper urging politicians to follow their conscience. “If the Prime Minister as a Catholic doesn’t want to impose his belief and the time has come for a more moderate line on abortion, then he resigns,” the monsignor said. “If you are faithful to your conviction, then you have to get out.”

His remarks come as the Oireachtas Committee on Health published two volumes of evidence it heard over three days on the proposed abortion laws.

Msgr Suaudeau, a scientific director of the Pontifical Academy for Life at the Vatican, added that politicians should not hide behind the claim that they are just doing their job. “Sometimes people forget Nuremberg. You cannot cover yourself with the cover of party discipline,” he told The Irish Catholic newspaper.

“Generally, if you are well-known and your party is proposing something that goes against your conscience you need to make it known, you need to speak. “Maybe they will ask you to abstain, sometimes people understand that you have an objection of conscience.”

Msgr Suaudeau warned practising Catholic politicians who support the abortion changes are pushing themselves out of the church. He said they “cannot live in two houses” when it comes to the contentious issue.