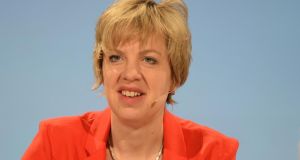 Labour’s Ivana Bacik pointed out that lenient sentencing in rape cases was being appealed.

A heated row erupted in the Seanad after Fianna Fáil’s Mark Daly claimed the judicial ranks “are full of white, middle-aged, conservative men” passing down judgment on women, victims of abuse and minorities.

The Kerry Senator called for gender quotas among judges and said 69 per cent of people were not satisfied with the judiciary and its sentencing.

Labour Seanad leader and constitutional lawyer Ivana Bacik said there had been a significant increase in the number of judges in recent years.

Seanad Cathaoirleach Paddy Burke warned Mr Daly: “You have to respect the role of judiciary and separation of powers” and said cases he mentioned were identifiable.

Mr Daly had highlighted a “horrific case during the week where a non-custodial sentence was applied in a rape case”. Calling for a debate on judicial appointments and for gender quotas, he said the judicial ranks were “full of white, middle-aged, conservative men and they hand down appalling sentences based on prejudice to a large degree, unfortunately”.