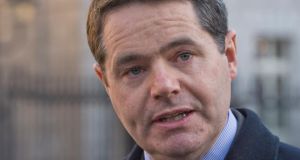 Paschal Donohoe: said there were problems with blanket speed limits and those best able to define a residential area were the local authorities and councillors. Photograph: Brenda Fitzsimons

He was responding in the Dáil to the party’s Private Member’s Road Traffic (Amendment) Bill amending existing law.

Mr Donohoe said that in the heads of a new road traffic Bill, which had been circulated to the Oireachtas transport committee, he would introduce the option of a 20km/h limit. “That is a clear mechanism in which this can happen, promptly and quickly,’’ he said.

The Minister said he had a “genuine challenge’’ with a concept of a speed limit being mandatory and centrally imposed. There were problems with blanket speed limits and those best able to define a residential area were the local authorities and councillors.

“That is the challenge I face in delivering a mandatory definition of the implementation of a speed limit,’’ he said.

Mr Donohoe said the objective was to prevent speed and improve safety for all. He said he issued local authorities with a circular on the control of vehicle speed in housing estates.

Hit by a car

The Bill, she said, would not have been introduced but for the determination, persistence and the powerful love of his family, his father, Christopher, and his mother, Roseanne. She welcomed them to the public gallery.

Ms Brennan has been involved in a sleep-out protest outside Leinster House to highlight a need for a change in the law.

She said the current situation whereby speed limits in housing estates could be introduced as a matter of local authority discretion, in a piecemeal fashion, was not satisfactory. “It is not working and it is not sufficient to protect the safety of residents, particularly children,’’ she added.

She said “Jake’s law’’ created a standardised, statutory speed limit of 20km/h, so as to introduce a level of safety to those housing estates where children lived, played chasing, kicked football, hurled and rode their bicycles.