Developer will own broadband network despite €3bn funds, Dáil hears

Government can step in and take over if contractor fails to deliver, says Varadkar 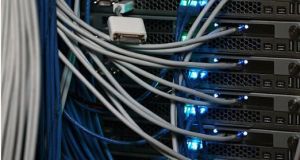 Leo Varadkar said the Government “has the option to buy” into the network, and because it was not a commercial piece of infrastructure “one would expect that to be a relatively inexpensive proposition”. File photograph: Getty Images

The Taoiseach has confirmed that infrastructure for the rollout of high speed broadband will be owned by the consortium that develops the network and not the State, which proposes to invest €3 billion.

Leo Varadkar said the Government “has the option to buy” into the network, and because it was not a commercial piece of infrastructure “one would expect that to be a relatively inexpensive proposition”.

He added the Government can step in and take over at any point if the contractor fails to deliver on the project. Mr Varadkar insisted these had been the terms “since very early on”.

He said the proposed contract was to build, operate, maintain and manage the network for 25 years, “at which point ownership stays with the consortium”.

He was responding to Fianna Fáil leader Micheál Martin, who said explanations would be needed if taxpayers paid €3 billion but did not own the network at the end.

Mr Martin said industry sources quoted a cost of about €1.5 billion to build the network. “I have no difficulty with people making profits, but for the taxpayer to spend €3 billion and not own, or having any prospect of owning at the end, is something that needs to be fully explained.”

He hit out at the “drip-feeding of information” on the cost, which had ballooned from the initial quote in 2012 estimated at €512 million by then minister Pat Rabbitte.

He claimed the Government was attempting to create distance between the crisis over costs of developing the national children’s hospital and the broadband announcement.

But the Taoiseach again insisted the original estimate was for a different project. Mr Varadkar said the €512 million was for connecting 1,100 villages, and the State subvention was never capped at €500 million.

Describing the national broadband plan as possibly the biggest ever investment in rural Ireland, the Taoiseach said €40 billion had been spent on roads and €10 billion on water in the past 20 years.

“Building infrastructure like this and connecting homes, farms and businesses all over the country will be expensive.”

Sinn Féin leader Mary Lou McDonald expressed serious concern about ownership of the network to rural and remote homes and businesses. She said Mr Rabbitte’s plan was to roll out broadband to every home and business in the State.

“What has changed, incredibly, is its costs. It’s now going to cost six times the original cost,” Ms McDonald said as she hit out at the Taoiseach for announcing for the first time only on Tuesday that the project would hit €3 billion in costs.

She said Mr Varadkar’s plan to make broadband a personal crusade was not credible.

Mr Varadkar said a number of strategies had been considered. He claimed Sinn Féin would oppose the broadband rollout if in government, and said the party’s suggestion to give the project to a semi-state company would be illegal under EU procurement law.