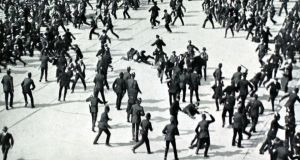 Joe Higgins said in the months that followed the 1913 Lockout the employers with great cruelty literally attempted to starve the working class of Dublin, in their determination to smash effective trade unionism.

The Government is introducing the reform and modernisation that is needed to balance workers’ rights with the need to create a competitive environment, Minister for Agriculture Simon Coveney has told the Dáil.

He said this balance was being achieved by the Government, in terms of meeting job creation targets, but there was a long way to go. “We have a lot of reform to introduce in this and many other areas.

“At the end of [our term in office] I hope we’ll be judged as a Government that has reversed the fortunes of Ireland – an Ireland that was collapsing when we took over, but an Ireland that will be growing and expanding in a way that respects both workers and employers.”

Mr Coveney was responding to a motion on trade union rights introduced by Socialist Party TD Joe Higgins, on the 100th anniversary of the 1913 Lockout.

The lockout
The lockout began on August 26th, 1913, when all trams stopped as workers sought a pay increase. It led to 20,000 workers being locked out of their employment.

Mr Higgins said in the months that followed, with great cruelty, employers literally attempted to starve the working class of Dublin, in their determination to smash effective trade unionism.

He said the Catholic hierarchy and clergy denounced the struggle, its leaders and their socialist ideals.

‘Dose of bile’
He said the Irish Independent and Evening Herald, owned by William Martin Murphy, “poured out a daily dose of bile and viciousness, attacking the working class, a struggle for justice and slandering and smearing [Jim] Larkin in particular”.

Mr Higgins said the centenary of 1913 would be commemorated by the Government, including the Labour party, but he hit out at Government reforms and said “the Labour Party dishonours and shames the heroes of 1913”.

Only a few weeks ago they pushed through the Dáil a Bill threatening to slash public workers’ pay and conditions unless they accepted slightly less onerous and repugnant acts, he said.

Labour in Government enforced austerity government with Fine Gael with attacks on workers’ living conditions, “all at the diktat of the financial markets, the same bunch of capitalists, bondholders and financiers denounced by Connolly and Larkin”.