Contemporary social democrats are deriving their own lessons from 1913

Opinion: Events of the year concerned not just class struggle but the right to citizenship 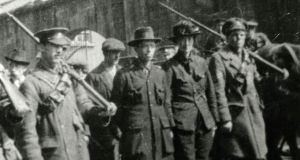 Michael Mallin and Countess Markievicz being arrested in 1916. Photograph: National Museum of Ireland

Commemoration works best when it thinks afresh rather than reproducing established memories and narratives. This year’s recollections of the 1913 Dublin Lockout are a case in point.

They help reframe the more prominent events that were to come during the decade 1912-22 in Ireland and throughout the world. They reveal how much the international penetrated the national then and now.

Speaking in Beresford Place near Liberty Hall during the lockout, Constance Markievicz linked the national, women’s and industrial struggles under way in Ireland and insisted they were closely intertwined.

The interconnections were brought out at a conference organised by UCD’s Institute of British-Irish Studies this week on their hidden histories. Markievicz herself illustrated the links, running the food kitchen for strikers, participating in the 1916 Rising with the Irish Citizen Army and being appointed to the Sinn Féin cabinet as minister for labour, the first in Europe.

The suffragette movement’s newspaper, The Irish Citizen, covered the 1913 events in detail and sympathetically. Women’s right to vote was seen as part of a wider struggle for liberty and equality. The hidden histories involved are exemplified in the story of Rosie Hackett, then a young worker locked out of Jacob’s biscuit factory who helped found the Irish Women Workers’ Union, fought with Markievicz in St Stephen’s Green, went on to devote a lifetime to trade union activity and has had the new bridge over the Liffey named after her.

Class struggle
It helps to frame these linkages as part of a struggle for citizenship as well as class struggle and social conflict.

For the unskilled workers led by James Larkin it was a demand for social and political inclusion in a capitalist system that treated them as inferior, excluded them from the skilled unions already well established and yet relied heavily on their unorganised casual labour.

The commemorations have resurrected the history of the inner city tenement communities through oral and local history, charting their gradual success in establishing their citizenship and securing rehousing in the following decades, despite the defeat of 1913.

William Martin Murphy, who led the lockout for the employers, was by then the most powerful capitalist in the south of Ireland. Owner of trams, railways, stores, hotels and newspapers and closely connected to the Irish Parliamentary Party, he was increasingly sympathetic to Arthur Griffith’s Sinn Féin.

He was well used to dealing with craft unions but was a sworn enemy of “Larkinism”, which he saw as an industrial unionism based on a revolutionary doctrine subverting the existing order and linked to US, British and continental syndicalism and socialism.

For Murphy, it was a highly political enmity with Larkin and Connolly not at all limited to its Irish setting. Their socialism was internationalist and inextricably connected to their trade unionism, using the general unskilled as the agents of change. And beyond the 1913 conflict loomed the Home Rule crisis and a European war.

Two leading contemporary social democrats sought to tease out the lessons of 1913 for today’s Irish labour movement. Joan Burton, Minister for Social Protection, recalled how Lloyd George’s social welfare and pensions acts of 1908 and 1911 were inspired by Bismarck and heralded the European welfare states after the second World War. Ireland’s one is now well established and one of the most generous, she said. It is under pressure from Government cuts and is best protected by policies for full employment and avoiding welfare traps by reforming entitlements.

She praised US president Barack Obama’s criticism of trickle-down economics creating inequalities and supported his alternative policy of expanding middle incomes to provide a living wage capable of stimulating the economy. However, this requires a rethink also at EU level, towards a more social Europe.

Jack O’Connor, general secretary of Siptu, said Ireland still lacks a positive right of trade union organisation. He acknowledged a contradiction between the functional side of trade unionism and its wider vocation as the agent of change towards a society based on solidarity not greed. Since 1913 was a lockout, not a general strike, it recalls the contemporary assault on the welfare state throughout Europe and challenges trade unions to protect it.

That is difficult to achieve from a defensive position, but there is a danger he feels in rejecting the Croke Park and Haddington Road agreements since previous winters of discontent ushered in Margaret Thatcher.

His support for erecting a defensive rampart against austerity pending economic recovery was rejected by a small group of picketers outside the meeting – so the polemics of 1913 live on.

Aldi Ireland to plant 1m native Irish woodland trees by 2025 17:47
New Limerick mayor in line for €135,000 salary 17:24
Level 5 extended until March 5th while officials consider ban on all non-essential travel into State 17:17
Independent inquiry to examine mother and baby homes in North 17:15
Pat Kenny ‘taken aback’ by scale of nursing home planned for site next to his home 16:54