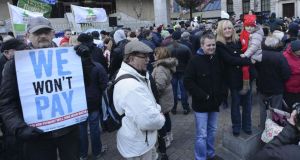 People Before Profit TD Richard Boyd-Barrett poses for a picture at the anti-water charges protest at the Central Bank in Dublin last February.Photograph: Dave Meehan

A Bill to ensure compliance from “won’t pay” debtors, including those who refuse to pay water charges, has been introduced in the Dáil today.

The Civil Debt (Procedures) Bill will allow a court to order deductions from payments to a social welfare recipient, or the attachment of earnings of employees for debts between €500 and €4,000.

Minister for Justice Frances Fitzgerald, who introduced the Bill, said it also abolishes the imprisonment of debtors and “fulfils a commitment made in the programme for government in this regard”.

She stressed “the reforms are aimed at debtors who have capacity to pay their debts but fail to do so, the “won’t pay” debtors. This would include Irish Water charges among others,” the Minister said, who added that other utilities such as energy or telecoms providers could use the new law.

Fianna Fáil justice spokesman Niall Collins said it was important for the debate that the Minister should indicate how many people would be liable specifically for Irish Water bills under the legislation.

Mr Collins described the Bill as a “Trojan horse providing another legal support to prevent the collapse of Irish Water”.

He added that the Government had to introduce the Bill “to shore up Irish Water and convince European officials of the financial viability of that company”.

The Limerick TD said his party favoured the ending of the practice of imprisoning people who could not pay their debts and the introduction of a system taking a small amount of money over time from wages or social welfare to pay off a debt over time.

But he said the Bill was directly related to gross mismanagement in the creation and implementation of the Irish Water system.

He criticised the Government for using the Law Reform Commission’s report to defend the more significant debt mechanism “which is directly inspired by the Irish Water crisis”.

Sinn Féin’s Caoimhghín Ó Caoláin said it was time for the Government to end the “charade”.

Mr Ó Caoláin said the only reason the Government sought to push the legislation through “is to give tyrannical power to the shambles that is Irish Water”. He said it went hand with the Environment (Miscellaneous Provisions) Bill, rushed through this week without proper scrutiny.

That Bill includes measures such as preventing the sale of a house if all water charges have not been paid.

“The Government is clearly desperate to deal with the Irish Water mess before the recess in order that come the autumn, Irish Water is not the subject of Dáil debate before a possible general election.”