Nuns say they will not pay Magdalene compensation

Four congregations will not contribute to fund, which could cost State up to €58 million 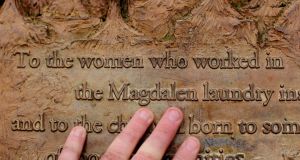 The four religious congregations that ran the Magdalene laundries have told the Government they will not make any financial contribution to the multimillion-euro fund set up to recompense former residents.

The Mercy Sisters, the Sisters of Our Lady of Charity, the Sisters of Charity and the Good Shepherd Sisters have informed Minister for Justice Alan Shatter in recent days that they will not pay into the fund, which could cost up to €58 million.

However, it is understood they have said they are willing to assist fully in all other aspects of the package recommended by Mr Justice John Quirke in his recent report, including the assembly of records and looking after former residents who remain in their care.

A spokeswoman for Mr Shatter said he was “disappointed” with the decision of the four orders not to make a financial contribution.

He will brief his ministerial colleagues about the situation at the weekly Cabinet meeting this morning.

No comment
Three of the four orders contacted through a spokesman were not prepared to make any comment at this point in time.

The Government announced the scheme last month after Mr Justice Quirke had conducted an examination of the various options to compensate the women who lived in the laundries, many of whom are now elderly.

The minimum payment was €11,500 for women who spent three months or less in a laundry and the maximum approved was €100,000 for those who were residents for 10 years or more.

Groups representing the women argued that higher awards should have been made available to those who had been long-term residents.

There was no onus on any applicant to show they had suffered hardship, injury or abuse. Some 600 women are reckoned to be eligible. The scheme is expected to cost between €34.5 million and €58 million.

When the scheme was announced, Mr Shatter said taxpayers expected the four religious orders to share the burden and make a contribution to the scheme. He would not be drawn on the amount he expected them to contribute.

State apology
The scheme follows on from a full apology on behalf of the State made to the survivors by Taoiseach Enda Kenny in the Dáil this year, in which he said that nobody should have been subjected to the conditions they endured.

That apology came in the wake an investigation by former senator Martin McAleese into the running and conditions within the laundries which were in operation for the best part of a century.

The report also established that the State had played a significant role in the continued operation of the laundries.