Number of asylum seekers in direct provision up on 2014 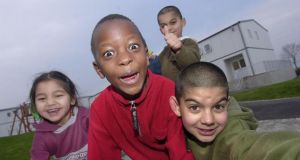 The number of asylum seekers in the direct provision system has risen in the past year with the biggest increases in Balseskin reception centre in Dublin and Knockalisheen, Co Clare.

Minister for Justice Frances Fitzgerald confirmed 4,484 people were accommodated at the end of May, compared with 4,305 at the same point in 2014.

However, in Mosney, Co Meath, the numbers dropped from 605 to 503. Currently, 37 accommodation centres are in operation across 16 counties.

Figures for 34 centres were provided by Ms Fitzgerald in response to a parliamentary question from Renua Ireland deputy leader Billy Timmins.

Ms Fitzgerald said the Reception and Integration Agency (RIA) was responsible for the accommodation of asylum seekers in the direct provision system.

“While the net change in those accommodated by RIA is plus 179 over the period, during that time a number of persons will have moved on from the accommodation while others will have come in to the system, mainly newly arrived asylum seekers,” she added.

She said asylum seekers were not required to avail of direct provision accommodation and “a number choose to make their own arrangements”.

The final report from the working group set up to advise Government on improvements to the process, with a focus on direct provision and supports to asylum seekers, was published last Tuesday.

Mr Timmins said the Government had presided over an increased number of residents housed at various locations.

A greater effort was needed to address the increasing numbers, “and the recent publication of a report on the matter doesn’t commit to do anything”.

The figures released by Ms Fitzgerald show numbers were up in 19 of 34 locations, while the figures had reduced in 13.

Meanwhile, Ms Fitzgerald told RTÉ’s This Week radio programme on Sunday she was not comfortable with people spending many years in direct provision. Having a family life in the system was not good for children, she added.

She said Ireland needed a fair and rigorous assessment process, “and those who do not qualify have to be returned to their countries of origin”.

She said the system needed to be more effective and efficient.

“Unlike the rest of Europe, we have a very complicated system with many levels of appeal. We’ll now be doing it the same way as every European country,” she said.

The Irish Human Rights and Equality Commission called on Government to implement the recommendations of the working group without delay.

Emily Logan, its chief commissioner, said: “As its next step, we recommend the Government establish an implementation group to give effect to the recommendations so that people seeking asylum in Ireland can live with a greater degree of respect and dignity.”

Ms Logan said the remit of the Ombudsman and the Ombudsman for Children should be extended to deal with complaints about the direct provision system, as recommended in the report.