It's the largest outdoor exhibition and agricultural trade show in Europe with 300,000 people expected over three days. But what exactly is the Ploughing Championships all about? 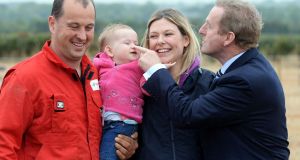 Screggan was awash with relieved sheep and anxious cows yesterday.

The cattle were very uneasy.

When the Taoiseach made that alarming announcement, news spread like wildfire among the herd. It was Cowpat City in the livestock enclosures before his arrival.

Having found his mojo a week earlier, Enda was now heading to Tullamore to rediscover his moojo. Daisy and Buttercup were living on their nerves.

The sheep, on the other hand, were positively frisky. This was in contrast to their demeanour on the opening day of the ploughing championships, when the announcer at the sheep shearing demonstration suggested the President might fancy having a go himself. This was after Michael D and his wife watched a world champion shearer defleece a large hogget in two shakes of a lamb’s tail.

And Michael D, ever game, looked for one delicious moment like he was considering taking up the offer. You could smell the fear in the holding pen as a chorus of bleats went up. “Typical. You spend all your life trying to avoid them and there’s never a bleedin’ butcher when you want one.”

In the end, President Higgins decided against. The sheep didn’t settle until he left for Dublin.

This year, the event is enduring a larger than usual plague of politicians. Europe’s biggest outdoor exhibition and agricultural trade show normally happens in the first week of the new Dáil session. However, due to ongoing refurbishment work in Leinster House, TDs and senators are returning later than expected. This means they can arrive at the event earlier and stay longer.

Enda Kenny came down around midday and it soon became apparent that he had no intention of making it a flying visit. It must have been a very long day for the poor cows, but as it happened, he didn’t trouble them.

Instead, the Taoiseach worked his moojo at a number of Government and community organisation stands after beginning his day out with a trip up to the fields to watch the ploughing matches.

It’s serious stuff at the top level, with places at the world championships at stake for the senior competitors.

Ploughing is the land equivalent of yachting: fascinating for participants and aficionados but not a great spectator sport. This might explain why the vast bulk of the 100,000 or so visitors to the event never set sight on a turned sod and the only stubbled field they see is the car park.

His chaperone for the day was Anna Marie McHugh, head honcho (in tandem with her mother Anna Mae) of the massively successful event. Anna Marie directed operations, making sure nobody stepped on any competitive ridges or seams while marshalling a compliant Taoiseach into suitable photo opportunities.

As he surveyed a crisply turned line with ploughman Brian Mahon, Anna Marie introduced a baby in a buggy to the scene. “Would she walk down to him?” she asked Brian’s wife Michelle, pointing to 14-month-old Chloe. “G’wan, leave her off. She won’t do any harm.”

So little Chloe tottered across the stubble towards her Daddy and the other man, oblivious to the line of cameras and cooing colour writers. She picked up speed, began to wobble and fell over.

Enda was in seventh heaven. He swooped immediately, scooping her up in his arms and brandishing her triumphantly for the cameras.

“Mammy,” urged Anna Marie. “Go down there quick for the photo!”

Enda, meanwhile, was prodding the baby on the nose.

Then he made a beeline for the crowd behind the rope for his firsts selfie of the day. An official grabbed smiling Chloe – who seemed quite taken by the Taoiseach – and handed her back to Mammy. “Here, you can have her back now.”

Then it was up to see the old-style ploughing display. Enda stood behind an old-fashioned plough and two magnificent French draught horses. Huge animals, with great power.

“Gerry,” shouted Anna Marie to Gerry King from Ardee, a multiple world champion. “Will ya let him hold the reins?”

Gerry handed the rope, attached to tons of blade and iron and many more tons of horse, to the Taoiseach. There was a sharp intake of breath and reporters, camera crews and stewards instinctively moved back.

“Look out behind!” shouted a steward.

He didn’t have to tell us.

Then everybody moved back to the headquarters of the Ploughing Association, where, this time, Anna Marie’s mother Anna Mae summoned a baby in a buggy from nowhere. He was dressed in miniature high-vis, all-weather dungarees. Anna Mae carefully opened a brochure for the show and placed it in the baby’s hand prior to the obligatory kissing of the farm baby by the Taoiseach.

Gerry Adams was causing a similar stir outside the Sinn Féin tent, when he was pinned up against the wall by journalists and asked his views on allegations concerning the killing of IRA informer Denis Donaldson which were aired on Tuesday night’s Spotlight programme.

“A lie and I totally refute it and categorically and specifically deny it,” he said.

Fifteen-year-old Síofra from Salerno secondary school in Galway was beside herself with joy when he posed with her. Why was she so delighted? “Because he’s my inspiration and I wanted to have my picture taken with him,” she giggled.

“No, he’s not,” her friend added quickly.

Having considered her first answer, Síofra, who was with friends from transition year, admitted she didn’t know much about Sinn Féin but they were really just trying to get photos with famous people.

“We got Ryan Tubridy too,” she explained, before adding they were now on the hunt for Marty Morrissey. Marty is a huge star here. There’s a cardboard cutout of him in the huge RTÉ marquee and long queues to pose with it.

He’s the ploughing festival’s equivalent of Brad Pitt. Brad Silage Pitt, but in a nice way.

They were running a competition in the Fine Gael tent with trips to Brussels on offer. But the question was very tough. People had to fill in the blank word before “Corcoran-Kelly.” That would be Marcella, the local TD.

Leo Varadkar attended his first ploughing festival. He said it was nothing to do with leadership ambitions. “The only two big events I haven’t been to in Ireland are the ploughing and Galway Races. Now I’ve just got Galway to do.”

Meanwhile, the Taoiseach was photographed at the Macra tent holding a big sign saying “Brainstorm”. He couldn’t refuse, as it was part of an admirable project on acquired brain injury by students from Coláiste Mhuire in Askeaton, Co Limerick.

Finally, he met sheepdog Jess at the Agri-Aware tent. “She’s a Dublin dog,” said her owner Donie Anderson, who farms in the foothills of the Dublin mountains near Tallaght. “Is she all right?” asked our Mayo Taoiseach, now firmly rocking his moojo, with the forthcoming All-Ireland replay in his mind.

Jess gave him a pitying look and sat, in dignified silence, as he pulled back her lips to show her Dublin teeth. “Look at them. That’s Dublin for ya.”

She should have taken a lump out of him.

In solidarity with the terrified cows.