Not Army’s role to explain 1916 in schools, says John Bruton 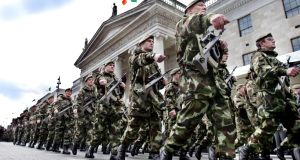 Former taoiseach John Bruton has criticised the Government’s decision to have Army personnel visiting schools as part of the 1916 commemoration programme.

Defence Forces representatives are delivering the national flag and a copy of the Proclamation to every primary school in the State. The programme includes a reading of a pre-selected extract from the Proclamation.

Mr Bruton said on Friday he thought it was very important that the Army, which was the ultimate guarantor of the State, should have a central part in any commemoration.

He spoke, he said, as somebody who participated in the 1966 commemoration as part of a guard of honour inspected by then president Eamon de Valera outside the GPO on Easter Monday.

“Having said that, I have to say I was a little uncomfortable with the idea that Army officers should be invited to visit schools to talk about a document prepared by a small group of people which initiated a campaign that involved violence…which, to put it at its least, was not supported by the majority of the people at the time it was undertaken,’’ he added.

Mr Bruton, who was speaking at a 1916 symposium organised by the Irish Association of Former Parliamentarians in the Seanad chamber, said he did not think it was the Army’s role to do this.

“I think it is a role of politicians, if they want to do this, or if others want to go and explain the Proclamation,’’ he added.

“I think the Army, because it is a non-political force, should be kept separate from anything that has any colour of political advocacy.’’