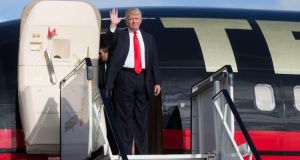 Minister for Finance Michael Noonan has defended his participation in a welcoming party for billionaire businessman Donald Trump at Shannon airport earlier this week.

A harpist, singer and violinist joined local dignitaries to greet Mr Trump on a red carpet before he visited the Doonbeg golf resort in Co Clare which he has purchased for €15 million.

The event on Monday was criticised by some commentators including The Irish Times’ Malachy Clerkin, who accused the welcoming party of “bowing and scraping” to Mr Trump.

Mr Noonan, who is a TD for Limerick, dismissed such criticism this afternoon.

“Would there be criticism if it was an IDA factory that was going into West Clare with 300 jobs? This man says he’s going to spend at least double the purchase price for investment down there.”

Mr Noonan said Mr Trump had also announced “commuter helicopters” from Shannon to the Doonbeg golf course and to other golf courses he owned in the UK.

“I’ve no connection with Donald Trump but I can assure you if it was the IDA that was bringing a factory into Clare and I was invited to go down there and there was 300 jobs in it, I’d be there,” he said during an interview on RTÉ Radio One’s News at One programme.

He said Mr Trump had consolidated a golf course that was in difficulty and already had a lot of people working for him in the area.