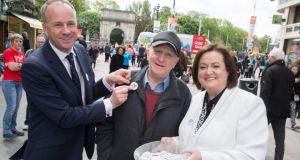 In Yes campaign headquarters we took to calling them Bráinne. Such was the symmetry between Brian Sheehan and Gráinne Healy, the co-directors of Yes Equality that their names began to merge. Together they were the axis around which this extraordinary campaign revolved.

The Yes Equality story is one of how the two pillar organisations for gay and lesbian rights, with some input from a handful of political and media specialists, built the most extensive and effective civic society campaign ever seen in Irish politics.

The nerve centre of Yes Equality was a medium sized room on the first floor of temporary offices in Clarendon Street in Dublin’s city centre. More than 30 operatives, mostly volunteers, were crammed into this room.

At its centre, sharing a desk, Brian and Gráinne tick-tacked intuitively, led softly, and confidently made the hundreds of big and small decisions necessary to build and steer a large, complex, purpose-built, temporary political machine.

Across from them sat a team which drafted, designed and then co-ordinated the distribution of almost three million items of literature. Behind them sat a team which grew and nurtured 60 local Yes Equality groups into an impressive ground force. Just over from them another team planned and implemented a 29-day YesBus tour which visited 80 towns on an 11,000 kilometre trek across Ireland.

Other enterprising staffers ran the Yes Equality merchandise operation. Through its online store and a pop-up shop in St Stephen’s Green they sold 6,500 T-Shirts, 2,300 tote bags and 800 hi-vis jackets and shifted half a million soon-to-be iconic Tá or Yes badges. This was the campaign that made political wearables trendy in Ireland.

In the same room a busy communications team managed a detailed calendar of innovative media events, generated a steady stream of press releases, monitored all broadcast coverage and placed opinion pieces in national and regional press. They also channelled the substantial research and rebuttal operation put in place by Lawyers for Yes and the Irish Council for Civil Liberties.

All of this activity was backed up by strong creative from the design agency Language and later from Havas Advertising and by a steady flow of campaign videos, many from an in-house videographer who volunteered full-time for the last three weeks.

Brian and Gráinne’s willingness to seek out and adopt advice from a wider circle proved crucial. They learnt from previous referenda in Ireland and from previous losses for marriage equality propositions in the United State. They orientated Yes Equality to focus on the “million in the middle”. They also mobilised the gay and lesbian community and their families and friends to intense activity.

Early decisions about tone were key to Yes Equality’s success. In late March we settled on the theme of “I’m Voting Yes, Ask Me Why” an open conversational approach designed to persuade and reassure voters.

This tone shaped events all over the country which, instead of the usual podiums and platform parties, involved local people, gay and straight, taking a microphone and telling why a Yes vote mattered to them personally. It was politics as never done before.

The campaign on the doorsteps was also one of conversations. Gay men and lesbian woman stood in front of voters together with friends and families and a flood of volunteers. Such was the organisational capacity that on the last Saturday high street canvasses were launched simultaneously at 70 different locations nationwide.

The key task for the Yes campaign was to avoid being provoked into public displays of anger. Instead Yes Equality sought to create a space where the public could see and hear the anguish caused by discrimination and the repression of sexual orientation.

In the atmosphere created by this tone, extraordinary things began to happen. The campaign became one of storytelling. Gay men and lesbian women told of their lives and parents spoke out publicly in support of their gay and lesbian children.

Maintaining this calm and respectful tone required rigid campaign discipline in the face of increasingly nasty messaging from the No side.

There was no complacency in this effort. The campaign days started at 8.30am with Brian and Gráinne chairing a roll-call at which each staff members updated colleagues on their work over the previous 24 hours.

Every Tuesday morning a political advisory group met as a sounding board for campaign strategy. Each Tuesday lunchtime the principals from GLEN, Marriage Equality and ICCL met as a supervisory committee. Every Wednesday at midday the general secretaries of the main political parties met at Yes Equality HQ. Each Wednesday evening leaders of partner organisations running their own campaigns for Yes did the same.

Each evening at 5pm there was an hour-long communications co-ordination meeting. The campaign day ended with a late night four-way conference call between Brian, Gráinne, campaign communication adviser Cathy Madden, and myself to focus on big media outings and overall strategy.

This level of coordination meant that very little happened in the campaign that was not planned or expected.

The only real surprise was the timing and extent of the Catholic church’s intervention. The bishops came in earlier and more stridently than we had originally anticipated. Our only unscheduled conference call was at 6.30pm on Saturday 3rd May after RTÉ reported details of a pastoral letter from Archbishop Eamon Martin to be read at churches that weekend.

We toyed with the idea of a head-on confrontation with the hierarchy for its failure to distinguish between civil and religious marriage. That would certainly have mobilised our base. We opted instead however to express disappointment at the tenor of the bishop’s interventions while spotlighting statements from dozens of high profile priests about why they were voting Yes.

We worried when the bishops took to the pulpits and airwaves again on the following two Sundays and when Archbishop Diarmuid Martin togged out as lead striker on the No Side for the last days of the campaign. Ultimately however our assessment that the bishops would have little impact on middle ground voters proved correct.

Last weekend, after two weeks without polling data, four polls came together. They presented no surprises. Detailed canvass returns the previous week showed Yes at about two to one over No. Each of the newspaper polls confirmed this. The intensive phase of, at times noisy, media debates had, as we expected, little impact on most voters.

Yes Equality’s focus for the last week was on a massive Get Out the Vote Operation implemented on a scale never previously seen in an Irish referendum. It all paid off.

Like all campaigns this one was physically exhausting but, like no other, it was emotionally draining. There was just so much at stake; the outcome mattered to the lives of so many.

We learnt much about the potential of a new positive style of campaigning which can engage the young. Irish politics has been altered by this campaign in ways yet to be determined. Everyone active in Yes Equality has also been changed by his or her involvement – I know I was.