‘No’ vote would be nightmare scenario for Taoiseach

Enda Kenny has been unwavering champion of abolition 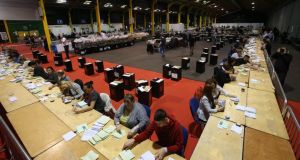 Counting of votes in the referendums on the future of the Seanad and the establishment of a new Court of Appeal under way at the RDS. Photograph: Niall Carson/PA Wire

The really big news this afternoon is the strong showing for the No side in favour of holding on to the Seanad. With turnout looking a good deal higher than some of the more dire predictions, there is no certainty at all that the Government campaign for abolition will carry the day.

This is in defiance of a steady succession of opinion polls which showed a consistent majority for abolition, albeit with a narrowing though still convincing margin as polling day drew close.

As partial tallies pile in, it now looks like Seanad supporters are in a majority in many Dublin constituencies and many urban areas outside the capital. Even where the Yes side is in the ascendant, the No campaign is polling quite strongly.

All of this points to a very tight finish this afternoon, raising the real possibility of an unthinkable defeat the abolitionists. Unloved as it undoubtedly is, the Seanad may be about to receive an unexpected reprieve. This would open up a nightmare scenario for Taoiseach Enda Kenny, the unwavering champion of abolition and the man who put the very notion on the political agenda in the first place and ran with in the last election.

This referendum is Kenny’s brainchild particularly and it would be a bad blow to his authority if it goes down. With Tánaiste Eamon Gilmore under acute pressure for separate reasons within Labour, defeat today would mean the two Coalition leaders are in a position of weakness in the run-up to the Budget on Tuesday week. It would be the last thing they need.

Although it would be very unwise to call the result at this early stage, it is already clear that there will be no walkover for the Yes campaign. On purely populist grounds, the abolition proposal looked like a winner form the off. But many more voters than it would like have found reason to question the allure of multi-million-euro cost savings and the opportunity to sack a total of 60 politicians.

Abolition was presented on the Yes side as an opportunity to extract a contribution from political system to the austerity agenda. On the No side it was cast - in the main by card-carrying members of the political elite - as an unseemly plot to trample over the little people and entrench Government power in parliament.

Thus the No side battled on the basis that abolition would be bad for democracy, even though the Seanad’s patent lack of democracy was always cast as the very best reason to do away with it. The power grab argument was rehearsed throughout, even the Seanad has but puny powers and is completely subordinate to the Dáil.

In tandem with all that were the earnest pleas of Seanad supporters for meaningful reform of the chamber and its narrow franchise, something Kenny refused to yield. To open that door - in the eyes of strategists on the Government side - would be to cripple the case for abolition at the very outset.

While the No side came up against an unusual alignment of Fine Gael, Labour and Sinn Féin, its defence of the Upper House seems to have hit home with many voters. This is in spite of paltry financial resources on the part of the Democracy Matters civic group and Fianna Fáil’s residual weakness in the wake of its 2011 defeat.

If the referendum is indeed defeated, it would be very difficult indeed for the Government not to grant reform. While the entire edifice of the abolition campaign was predicated on the idea of the Seanad’s uselessness and lack of democratic credibility, Fine Gael and Labour could hardly plead that it would be best to hold on to an unreformed upper house.

The irony is that there will be plenty to lose in a reform situation for Senators who will, on the face of it, benefit from the retention of the status quo. For every star senator, there are a good many more who bring little enough to the debate.

That very point was rehearsed many times by the abolitionists, but the people are sovereign and they do not appear to have been as receptive as might be thought otherwise.

It’s still early days, but the Government has taken a hit. We will know soon enough whether it proves to be a knockout.