It was a dramatic resolution filled with heart-stopping tension 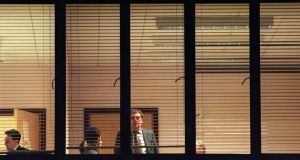 Even after a lapse of 15 years, the drama, tension and excitement of the days leading up to the Belfast Agreement remain vivid memories to all who were present, whether as participants or media observers.

The talks took place in Castle Buildings, an uninspiring complex in an obscure section of the Stormont estate, some distance from the imposing structure of the Parliament Building. Initially, most of the action was taking place offstage in London and Dublin and a joint draft with a fairly green tinge, agreed by British prime minister Tony Blair and taoiseach Bertie Ahern, was brought to talks chairman George Mitchell’s office on the evening of Sunday, April 5th.

Lists of areas for North-South co-operation followed – more than 60 overall, it was said – just before midnight on Monday, April 6th. Delegates were told that the version given to each party had subtle stylistic or typing differences which would reveal the source of any media leaks.

The deputy leader of the Ulster Unionist Party (UUP), John Taylor, said on the morning of Tuesday, April 7th, he wouldn’t touch the document with “a forty-foot pole”. Tony Blair arrived in Belfast that evening and delivered his famous comment that, “It’s not a day for the soundbites . . . but I feel the hand of history upon our shoulders, I really do”.

Back in Dublin, Bertie Ahern’s mother, Julia, had died early on Monday, aged 87. He was praised for the fact that he flew to Belfast for a 7am breakfast meeting with Blair the following morning, returning in time for the funeral Mass.

I remember thinking, in light of what was being leaked about the North-South section of the draft document: “They’ve gone too far, the unionists will walk away.” However, the list of areas for cross-Border co-operation was quickly reduced from over 60 down to 12.

Solemn-faced
It was just after 3am on the morning of Good Friday and there was a light fall of snow on the ground when solemn-faced representatives of the SDLP emerged to tell reporters the party had reached agreement with the UUP on a cabinet-style powersharing executive with as many as 12 ministers. There was an iconic moment when the head of the SDLP delegation Seamus Mallon arrived back in the party’s rooms with the glad tidings. Television cameras captured leading party member Bríd Rodgers, in silhouette, hugging Mallon and other colleagues in delight.

At the same time, Gerry Adams and Martin McGuinness were hammering out an agreement with Blair and Ahern on a time-frame for the release of prisoners. Decommissioning of paramilitary weapons, which was to prove such a major bugbear in the future, had been put on the long finger.

On prisoners, Sinn Féin whittled the period for total release from three down to two years. In an extraordinary development, former Old Bailey bomber Gerry Kelly went looking for Progressive Unionist Party leader, the late David Ervine, who had also done time for explosives offences. Kelly suggested a common front to demand a one-year release period, but this proposal was turned down.

Journalists were billeted in huts located in the carpark. To while away the hours, colleagues traded old yarns and jokes. Eventually people’s energy ran out and they slept where they sat or on the bare floorboards. Thanks to a tip-off from a kindly RTÉ colleague, the present writer located an empty bunk in a caravan used by the national broadcaster – due recompense for all those years paying the licence fee!

After the 3am agreement with the SDLP, Trimble adjourned to the nearby Stormont Hotel for a few hours of sleep. But he had to come back before 8am – not everyone had expected a cabinet or executive that would include republican ministers without any prior decommissioning of weapons: the IRA in government! There followed what became known as the “meeting from hell” in the UUP rooms, with one delegate reportedly fainting from the strain.


‘I am doing it’
It was touch and go. Blair composed a letter for Trimble to the effect that he wanted decommissioning to start straight away. Lagan Valley MP Jeffrey Donaldson made it clear he could not back a deal that he felt blurred the lines between terrorism and democracy. The UUP leader said, “I am doing it”, and left the room. Donaldson’s departure created a flap among reporters, who confirmed after some frantic phone calls that he wasn’t just going on holiday as they had been told.

Trimble confirmed to the talks chairman at 4.45pm that the UUP was on board. The former majority leader in the US senate had learned that you don’t delay so he convened a plenary for 5pm, in 15 minutes, where the deal was approved. Mallon later recalled that Trimble was “in a white heat of pressure” and my personal recollection is that the UUP leader’s normally ruddy complexion had turned quite scarlet from the excitement and pressure and he was like a man with an electric current running through him.

Later, in a small room, amid dirty coffee cups, the two prime ministers signed the Belfast Agreement to go with the Good Friday pact and superseding the 1985 Anglo-Irish Agreement. It was said that US president Bill Clinton was on the phone to participants throughout the night.


‘Hand of history’
Blair recalled for reporters his comment on arrival about feeling the “hand of history” on his shoulders. “Today I hope that the burden of history can at long last start to be lifted from our shoulders,” he said. It no longer felt like a soundbite.

A colleague turned and pumped my hand in delight. Seamus Mallon said afterwards he saw hard-boiled journalists in tears. Personally I felt pressure rather than emotion: there were stories to be filed and deadlines to meet.

There was still a bumpy road ahead. I was standing beside a senior republican strategist as Trimble upped the ante by calling on republicans now to declare that their “squalid” terrorist war was over. The Sinn Féin figure exploded: “He’s like a f***ing child!” But one month later, a special party ardfheis approved the deal.

The marriage might prove a rocky one but they were still going ahead.


l Deaglán de Bréadún is a former Northern editor and author of The Far Side of Revenge: Making Peace in Northern Ireland (Collins Press, 2008)