Niall O’Dowd calls for ‘pressure’ on US over Irish illegals

‘American government responds to pressure, they don’t respond to being nice’ 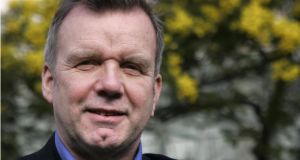 New York-based publisher Niall O’Dowd has told TDs and Senators to put pressure on the US Government to improve the situation of Irish illegals.

Mr O’Dowd, speaking from the US, was among a number of immigration reform advocates participating in a video conference for TDs and Senators in Dublin on Wednesday.

“It’s very difficult to get a Government to act...The American government responds to pressure, they don’t respond to being nice and knocking on the door and saying please will you,” he said.

The Israeli Government did well in the US because they were prepared to “kick down doors”, Mr O’Dowd added.

Among those in attendance at the video conference in a Dublin city-centre hotel were Independent TD Denis Naughten, Fine Gael’s Bernard Durkan and Fianna Fáil Senator Mark Daly.

Sinn Féin deputies Dessie Ellis, Seán Crowe and Michael Colreavy were also present, along with party Senators Trevor Ó Clochartaigh and David Cullinane. The chairman of the Irish Lobby for Immigration Reform (ILIR) Ciarán Staunton, also speaking from the US, said the Irish Government should make a formal request to the US Government and the new US ambassador to Ireland, Kevin O’Malley.

Mr Staunton, from Mayo, said they should ask for three- and 10-year “unlawful presence bars” for undocumented Irish living in the US to be waived. He insisted Mexicans already benefited from the waiver.

“We’re not waiting for any legislation. We’re waiting for the Irish Government to formally lobby. I’m talking about a political initiative,” he said.

“If we have this issue moving we figure 25, 30 per cent of our community, if not an awful lot more, could be legal in no time at all.”

Mr Durkan, speaking from the floor in Dublin, said Taoiseach Enda Kenny would raise the issue of illegals when he travelled to the US for the upcoming St Patrick’s Day celebrations.

“I think it should be underlined that every effort is being made and continues to be made by all of us in public life here to achieve the same objective that you have set out,” he said.

He said people who could not come home for funerals or other family occasions should be facilitated.

Mr Kenny will raise the topic of immigration reform in Washington next week and Minister for Foreign Affairs Charlie Flanagan will meet with Irish community leaders in New York.

A spokeswoman for Mr Flanagan said: “Minister Flanagan and his Department are also engaging with the US authorities to see if it would be possible to ensure greater predictability around administrative waiver approval, and have been in recent contact with the US Embassy on this matter.”

She added that he remained committed to and supportive of any steps which can alleviate the difficulties of the Irish undocumented in the US.

The spokeswoman said the Government would continue to engage with the US authorities on all possibilities that might help undocumented Irish people to “regularise” their situation.