Next budget to be revealed in October 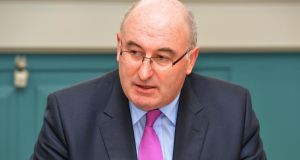 The announcement of next year’s budget has been brought forward to October 15th as part of a reordering of the entire budgetary process.

The Government decided at its weekly Cabinet meeting yesterday to move the annual budget from early December to October to comply with an EU-wide process of budgetary surveillance.

The change means that the budgetary process will get under way in a month’s time, starting with discussion between the Department of Finance and individual departments about their annual estimates.

The Coalition introduced a three-year estimates cycle in 2011, with the overall allocations for each department already laid down. However, a lot of haggling still remains over the details of each departmental estimate.

The main reason for moving the budget to October is to comply with new rules for the euro zone agreed by member states two years ago to strengthen economic and budgetary co-ordination for the EU as a whole but particularly for the euro area.

The new rules about budgetary surveillance are particularly aimed at countries like Ireland which are in a financial assistance programme. However, they are designed to apply to all euro zone countries to ensure that excessive deficits and the prospect of financial instability are eliminated. The aim is to ensure that all policies are analysed and assessed together, and that policy areas which previously were not systematically covered by economic surveillance, such as macroeconomic imbalance and financial sector issues, are included.

EU-level discussions on fiscal policy, macroeconomic imbalances, financial sector issues, and growth-enhancing structural reforms now take place before governments draw up their draft budgets and submit them to national parliamentary debate in the second half of the year.

The annual cycle has already begun with the EU Commission’s annual growth survey, which gives broad guidance on priority actions to be taken at EU and national level.

Member states then submit stability or convergence programmes on their fiscal plans and national reform programmes on structural reforms and measures to boost growth and jobs.

These reports are then assessed by the commission and will be discussed at the June meeting of the European Council, at which they will be adopted.

Government sources said that as well as the EU requirement for moving the budget forward there were also sound reasons at national level. It is widely believed that the timing of the budget in early December has acted as a drag on consumer spending for Christmas in recent years.

The Cabinet also agreed yesterday to publish the Vehicle Immobilisation Bill designed to impose a code of behaviour on companies who clamp cars for public and private bodies. The Bill was brought to Cabinet by Minister for Transport Leo Varadkar.

Ministers also accepted a proposal from Minister for the Environment Phil Hogan that new rules to encourage philanthropy should be considered.