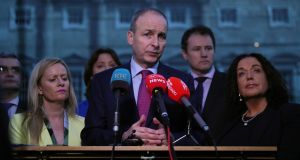 Taoiseach Leo Varadkar and Fianna Fáil leader Micheál Martin are to appoint separate teams to oversee the operation of the confidence-and-supply deal until its conclusion in spring 2020.

Mr Martin yesterday announced he would extend the deal that underpins the Fine Gael-led minority government for the duration of 2019 because of continuing Brexit uncertainty. He said the next election was likely to take place in spring 2020.

This would be just a few months shy of Mr Varadkar’s request that the election take place in summer 2020.

Speaking to the Fine Gael parliamentary party last night, Mr Varadkar said Mr Martin had made the right decision, and contrasted stability in Dublin with the political uncertainty in London.

No new policy measures were agreed between Fianna Fáil and Fine Gael during seven weeks of talks, and Mr Martin said delivery of existing commitments would be the focus of the extension. Both sides said the text of existing deal, struck in spring 2016, remained in place and would not be altered.

Mr Martin said the review of the arrangement to date had raised serious concerns on the issues of health and housing but indicated his party would not force the Government to change its approach to the national broadband plan as part of the extended deal.

He said the roll-out of rural broadband was a matter for the executive, and added his party wanted greater detail on the amount of resources that would be available in future budgets.

Sources said the teams of four chosen by each party leader to carry out the confidence-and-supply review would be reappointed to assess how the deal was progressing every two to three months.

Fianna Fáil is to produce a list of legislative initiatives that passed initial stages in the Dáil since the deal was struck in 2016 but have since stalled.

“Fianna Fáil is determined that the political chaos we see in London will not be allowed to spread to Ireland, ” Mr Martin said. “We simply do not believe that the national interest could in any way be served by taking up to four months during next year to schedule and hold an election campaign and then form a government.”