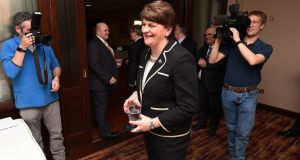 Arlene Foster has been elected leader of the Democratic Unionist Party, succeeding Peter Robinson, who has led the party since 2008. Photograph: Charles McQuillan/Getty Images

New leader of the Democratic Unionist Party Arlene Foster has said she wants to create a “more harmonious” society in Northern Ireland.

She told the DUP parliamentary party and ruling executive that unanimously elected and ratified her as leader on Thursday night that while the “Troubles have scarred Northern Ireland’s history we must not let them shape our future”.

The DUP’s ruling executive met on Thursday night in the Park Avenue Hotel in east Belfast to formally ratify 45-year-old Ms Foster as the third leader of the DUP - the first woman in the role - following in the steps of Peter Robinson and before him, the Rev Ian Paisley.

The Assembly member for Fermanagh-South Tyrone who is married with three children was the only candidate for the post.

Mr Robinson will remain as First Minister until the first post-Christmas meeting of the Northern Assembly on January 11th, when Ms Foster is expected to be elected to that post as well.

After her election, Ms Foster paid tribute to Mr Robinson. “He was never stronger than when the times were tough, and never better than when there was a political crisis,” she said.

Ms Foster said she wanted the DUP to “become a party of ideas”. And she added, “The style of leadership may change but the fundamental values of this party will not.”

Ms Foster said people must believe a “united community” can be created. She quoted from Belfast writer C S Lewis who said, “There are far, far better things ahead than any we leave behind.”

She also quoted from Seamus Heaney who said, “Believe that a further shore is reachable from here.”

She said, “A further, better shore may not always be the clearest to see or seem the easiest to reach. But it is there and it is not beyond us.

‘Future in our hands’

“We aren’t held back by the Troubles or the inability to shape our own destiny. We don’t need to look to anyone else for help, or point the finger of blame in another direction. Our future is in our own hands,” she added.

Ms Foster said when she was growing up, “many of our family and friends firmly believed that a united Ireland was inevitable” but it “never arrived”.

“The best way for us to cement the union for this and future generations is to do something that our enemies did their best to prevent. And that’s to make Northern Ireland work,” she added.

“How do we do that? By focusing on ideas and not ideologies. The people of Northern Ireland don’t want to hear their politicians squabbling about issues that seem unconnected to their daily lives.”

After Mr Robinson last month announced he would be resigning, it was expected the DUP deputy leader and North Belfast MP Nigel Dodds would become leader and that Ms Foster would be First Minister.

This was depicted as the “DUP dream team”, with Mr Dodds representing the traditionalist Protestant fundamentalist wing of the party and Ms Foster, a member of the Church of Ireland, reflecting more moderate views.

Mr Dodds however caused great surprise when earlier this month, after much “prayerful thought”, he ruled himself out for the leadership, citing the difficulty of being leader while operating from the House of Commons.

For a time it appeared that Ms Foster, who defected from the Ulster Unionist Party to join the DUP in 2004, might face at least one opponent, but after seriously considering the matter, East Antrim MP Sammy Wilson - who was at Thursday night’s meeting - decided he would give the Fermanagh woman a free run.

Ms Foster, a law graduate from Queen’s University Belfast, has been a Minister continuously since 2007, when Dr Paisley agreed to enter the powersharing Northern Executive with Sinn Féin.

Twice - in 2010 and earlier this year - at times of political crisis she stood in for Mr Robinson as acting First Minister.

Ms Foster will be confronted by a number of challenges as leader and First Minister.

She must strike up a working relationship with Deputy First Minister Martin McGuinness, notwithstanding his association with the IRA which attempted to murder her father, a part-time RUC member, and which bombed a school bus on which she was travelling in 1988.

She must also prepare the DUP for the Assembly elections in May.

The DUP is the largest party in Northern Ireland, but with a resurgence in confidence in the Ulster Unionist Party the party will be under pressure to hold on to the 38 seats it won in the 2011 Assembly elections.