New apartment guidelines not a lowering of standards - Kelly

People have ‘to get real’, Minister says as orders reduces minimum studios size by 27% 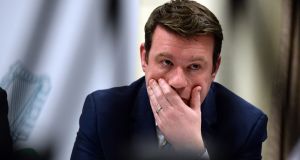 Minister for the Environment Alan Kelly has defended the guidelines on apartments issued by his department saying there would not be a lowering of standards.Photograph: Cyril Byrne / THE IRISH TIMES

Minister for the Environment Alan Kelly has defended the guidelines on apartments issued by his department saying there would not be a lowering of standards.

The new orders issued by the Department allows studio apartments which are 27 per cent smaller than the minimum apartment size currently permitted in Dublin to be built.

“I believe these are very good standards” he said.“These will be affordable. There is no point in having standards in place if nobody is going to build them.” he told RTÉ Radio . People have to “get real” about the capacity to build apartments.

The apartments, with combined living and sleeping areas – currently prohibited under the city’s planning rules – could account for half of new build-to-rent complexes in Dublin.

At 40 sq m, they would be just 2 sq m larger than the smallest apartments built in Dublin in the mid-1990s.

Mr Kelly said these were “design standards” which were “nothing to do with building regulations”.

“We have made changes to ensure there can be apartments built that are actually affordable,” he said.

Mr Kelly said it was not connected with “building regulations” which was a “completely separate area”.

Building standards will be the “best we can” and we are “ not going back to the issues we had in the past,” he said.

“In relation to height of apartments, size of apartments, number of lifts, the number of car parking spaces ...We have made changes to ensure there can be apartments built that are actually affordable,” he said.

In what will be seen as a major boost to developers, the Planning Guidelines on Design Standards for New Apartments, which local authorities must implement, reduce the minimum size of all types of apartments which can be built in the city.

The current city development plan expires next year and the council is in the process of drafting a new plan to last up to 2022.

It proposed maintaining its current size standards for one, two and three bed apartments, but introducing studios at 45 sq m, within strict limits.

These studios could only be permitted in schemes of more than 100 apartments that have communal facilities such as common rooms and gyms, and could account for just 7.5 per cent of the apartments in the complex.

They must be for renters, not owner-occupiers, and must be in single ownership for at least 20 years, during which time they cannot be sold off piecemeal.

In contrast, the new orders will allow developers to have up to 50 per cent studios in a development as long as it contains 50 apartments and is “within walking distance of centres of employment or on or immediately adjoining major employment sites”.

The studios could be included in “certain specific circumstances, such as part of new ‘build-to-let’ managed accommodation”. Communal facilities should “not generally be imposed as requirements by the planning authority” unless the developer proposed them or agreed them with the council.

The guidelines also reduce the number of “dual aspect” apartments required in a scheme.

Currently, 85 per cent of Dublin city apartments must have windows on two sides. The council is proposing in the next development plan to cut this to 50 per cent.

The department said this may be further reduced to an “absolute minimum” of one third of apartments.

The department’s orders “will take precedence over policies and objectives of development plans, local area plans or strategic development zone planning schemes and will apply to all housing developments, whether public or private”.

Announcing the guidelines, Minister for the Environment Alan Kelly said there had been an “upward spiral” of planning requirements by “some” local authorities, but added: “I will not stand for shoe-box living that was the hallmark of the Fianna Fáil governments of the past.”

Girl left scarred after falling into brambles at school secures settlement of €90,000 13:09
Covid-19 Vaccine Tracker: What's available in the Republic of Ireland and what else is coming? 12:37
Appeal to help find golden eagle missing in Co Wicklow 12:30
Seven arrested in Cavan over suspected blackmail plot 12:12
HSE to contact high-risk patients about vaccine, says chief clinical officer 12:09