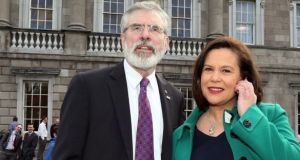 Sinn Féin deputy leader Mary Lou McDonald says she is not embarrassed by Gerry Adams’s use of social media.

Sinn Féin leader Gerry Adams has again apologised for the use of the N-word in a tweet.

Mr Adams said the late South African president Nelson Mandela would have understood his use of it in his comment.

Mr Adams had initially defended his use of the racist term in a tweet about Quentin Tarantino film Django Unchained but later said it was “inappropriate”.

Speaking on RTÉ’s Ryan Tubridy show on Wednesday, he said the use of the word was “silly and stupid” and apologised unconditionally.

“I had been canvassing in Ballymurphy for an hour and a half. I’m not in Ballymurphy much at present, I was meeting a lot of people I hadn’t seen in a long time, and this brought back a background of memories of what happened there,” he said.

“That evening I was babysitting. I don’t have Netflix and came up with this movie Django, which is very powerful and very violent film , and that lies the background to the tweet and the use of the N- word.

“The whole thing was to make a political point, had I left that word out whether or not the tweet have gotten any attention is another matter.”

The Louth TD said he “certainly wouldn’t do it again” and there was no excuse for the tweet.

“I was paralleling the experiences of the Irish, not just in recent times but from .. the penal days when the Irish were sold as slaves, the Cromwellian period.”

Mr Adams, who was a pallbearer at Mandela’s funeral, was asked if the South African hero would have understood the comment in the context it was used.

“I think he (Nelson Mandela) would understand, I got to know him quite well. I met him numerous times,” he said.

“The whole thing was to make a political point, It was done in a stupid and a clumsy way.

“In a funny stupid way I’m a wee bit colour blind on these issues. We’re all human beings and our skin colour or gender or ethnicity… beneath it all, we are human beings.”

Ms McDonald said Mr Adams was aware he should not have used the word and has apologised for that.

She said the term is a “horrible and loaded” one but his apology for using it in a tweet is genuine.

The deputy leader said: “Gerry has acknowledged and apologised for the use of that term. all of you will know that Gerry, whatever your view of him is, has not got a racist instinct or a racist bone in his body.”

Ms McDonald said Mr Adams is a prolific tweeter who highlights his “idiosyncratic” sense of humour.

She insisted she was not embarrassed by his tweets but admitted it was distracting from some of the issues that the party wants to raise.

Ms McDonald said the controversy was as a result of a media who were seeking to fill column inches.

Protest at Áras an Uachtaráin over mother and baby homes Bill 17:46
Water on moon may be more common than previously thought 16:53
Pledge to ramp up processing of applications from undocumented migrants 16:20
Three relatives dead after apparent murder-suicide in Kanturk, Co Cork 16:05
Covid crisis: Five dead in North and 727 new infections 15:24