‘Will the new guy be on time?’ asked a Swedish journalist. ‘The old guy was always late.’ 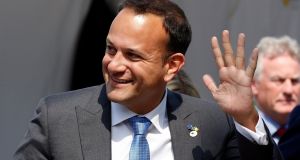 If new Taoiseach Leo Varadkar was somewhat starstruck on his visit to Downing Street last week, recalling a scene from the film Love Actually where Hugh Grant dances down the stairs of the British prime minister’s famous residence, there was little danger of a repeat performance in Brussels Thursday.

That’s not so much because some of the denizens of Leinster House found his film references a bit embarrassing. They weren’t Leo’s audience anyway. It’s because the EU institutions are nobody’s idea of the backdrop to a romantic comedy.

You could count on one hand the number of films that have been made in the Justus Lipsius building, the cavernous space where meetings of the European Council take place. In fact, you could count them on no hands.

Downing Street has hundreds of years of history, drama, political intrigue and a big shiny black door that opens mysteriously from within; it has Gladstone and Lloyd George and Churchill. The Justus Lipsius building has about 24 security checks and qualified majority voting. There’s no comparison, really.

The EU institutions haven’t even been subjected to a gratuitous CGI destruction in a disaster movie. No film director has ever thought: “Let’s blow up the Justus Lipsius building. That’ll really shock the audience.”

Maybe that’s the EU’s problem? But we digress.

So the new Taoiseach strode in, all business and fluent purpose.

“First of all, I’m really pleased to be here at my first European Council meeting,” he said. You could see he was, too, the big happy head on him (but no film references). He had “very interesting meetings” with President Juncker, which is not something you often hear people say before lunch, and with President Tusk, which is not something you hear people say ever. Leo was also “meeting prime ministers like Angela Merkel during the day”.

He dropped the name with Enda-esque casualness. Also the Estonian prime minister, his aides said. That might be one for the cheat-sheet they’ve presumably given him.

There is some curiosity in Brussels about him. Irish officials report a high degree of interest in the new Irish prime minister.

“You have a new guy?” asked a Swedish journalist. “Will he be on time? The old guy was always late.”

This guy likes to be on time.

Macron swept by, the star of the show, to a racket of questions and camera clicks. Inside, Tusk welcomed both himself and Leo to their first meeting of the Council, where there was much continental kissing and manly handshakes, but not at the same time.

Then Theresa May, stiff and stern, a politician in kitten heels and on the edge of the abyss chuntered in. Imagine being the prime minister of the United Kingdom and having your political fate in the hands of the DUP.

Of course, Leo has to contend with Fianna Fáil, on whom his Government depends. He proffered a sort of olive branch to Micheál Martin on Thursday, albeit a fairly withered looking one. He recognised the need for confidence building measures, he said. He would set up a committee on mental health that Fianna Fáil was looking for.

Later, Leo followed the example of Enda and emphasised the importance of an invisible border to the peace process. There is agreement on this in the Justis Lipsius building. As to the peace process between Leo and Micheal, the prospects are much more uncertain.