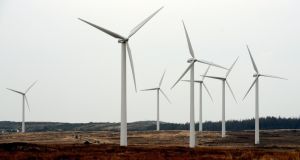 “Attainment of the 40 per cent target will require another 200 wind farms, 700km of new transmission line and hundreds of new towers to carry these lines. These transmission reinforcements alone will cost up to €3.9 billion, according to EirGrid,” says Dr Anthony White. Photograph: David Sleator

Achieving the target of generating 40 per cent of Ireland’s electricity by 2020 from renewable sources would require another 200 wind farms around the country, energy specialist Dr Anthony White has said.

Ireland aims to generate 40 per cent of all its electricity by 2020 from renewable sources. But Dr White said we were going about this the wrong way by following an “all wind” approach.

“Attainment of the 40 per cent target will require another 200 wind farms, 700km of new transmission line and hundreds of new towers to carry these lines. These transmission reinforcements alone will cost up to €3.9 billion, according to EirGrid.”

This option would “not just save billions of euro, but would not put at risk Ireland’s world-famous tourism and bloodstock industries”.

“We wouldn’t need to pepper the countryside with industrial-scale wind turbines and transmission towers,” he says.

“Some of these turbines are 169m in height – almost three times taller than the Liberty Hall building in Dublin, or one-sixth the height of Ireland’s tallest mountain, Carrauntoohil.”

He said renewables were now cheaper than fossil fuels. The price of solar power had dropped by 80 per cent in the past seven years and the cost of wind energy by 55 per cent.

He said replacing fossil fuels with renewables would enhance competitiveness.

Oisín Coghlan of Friends of the Earth said the fossil-fuel age was over, “or we risk civilisation being over”.

“Our Government has already adopted the policy objective of reducing our CO2 emissions from electricity, buildings and transport by at least 80 per cent by 2050.

“And the Climate Action Bill will give that policy objective legal recognition when it is finally passed in the autumn,” Mr Coghlan said.