Monaghan County Council: ‘Take your monkey off my back’ McElvaney tells RTÉ 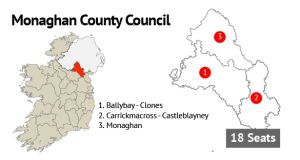 A former Fine Gael councillor was re-elected as an Independent in Co Monaghan on Sunday, and took the opportunity to criticise RTÉ when addressing his supporters.

After being re-elected to Monaghan County Council, Hughie McElvaney hit out angrily at the RTÉ’s “Prime Time Investigates”.

“A monkey was tied around my back with the visit of RTÉ in 2015,” said Mr McElvaney. “Take your monkey off my back and go back in the swamp where you belong among the reptiles and snakes and don’t be looking where I am and just leave me alone.”

He challenged the RTÉ Prime Time reporter to come and look at the piles of ballot papers built up in his name at the count centre.

After serving 45 years on Monaghan County Council (first elected in June, 1974), he said he looked forward to having served 50 years at the end of this new term, in the service of the people of Clones and Ballybay.

He said this had been a very difficult campaign for him, one of the most difficult in his years in public life. This was because it had been decided to reduce the municipal district from six seats to five. “I know who they were targeting, but the people of Ballybay and Clones have spoken and put Hughie back where he rightly belongs.”

In the RTÉ footage as broadcast, Mr McElvaney is shown asking an undercover RTÉ reporter for £10,000, which he indicated should be in sterling, to help fend off local objections to an alleged wind farm and also help the fictitious company navigate the council’s planning process. Mr McElvaney is shown sweeping the sought-after money across a table with both hands, stuffing it into his pockets.