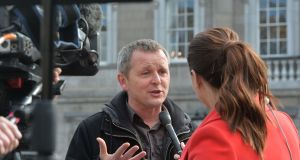 Richard Boyd Barrett said he was ‘not opposed to the measure insofar as it would give relief to lower and middle-income people, many of whom were struggling to keep a roof over their heads’. Photograph: Alan Betson / The Irish Times

There has been a mixed response from Opposition parties to the Government’s plans to cut inheritance tax bills, with only Sinn Féin opposing the move outright.

People Before Profit TD Richard Boyd Barrett said that reducing inheritance tax would give many ordinary people a break, while Fianna Fáil and the Labour Party said they were not opposed to the move, but said they would have different priorities.

Yesterday The Irish Times reported that the programme for government published this week included a commitment to increase the tax-free threshold for children inheriting from their parents to €500,000. It is currently set at €280,000, after which a tax rate of 33 per cent applies.

This would result in most people avoiding inheritance tax completely.

Mr Boyd Barrett said he was “not opposed to the measure insofar as it would give relief to lower and middle-income people, many of whom were struggling to keep a roof over their heads”.

However, he said, it should “be paid for by people with significant wealth and with very high incomes”.

Labour Senator Ged Nash said: “Labour’s priority would be to continue to provide tax reductions for low and middle-income families and to invest in the services families and communities need.”

Mr Nash said while Labour accepted that there may be a case for “modest increases” in the inheritance tax thresholds, there is also a view in the party that cutting these taxes will “reinforce wealth”.

However, he said a “greater priority for Fianna Fáil was to reduce USC for low and middle-income families”.

“The current thresholds are generous and allow for a tax-free allowance of a quarter of a million euro. We have to decide what kind of society we want.

“Do we want to end the scandal of child homelessness and long hospital trolley waits? If the answer is yes then Government needs the revenue to fund vital front line services.

“Fine Gael may think that giving massive tax breaks to small numbers of people is a good idea. I don’t.

“I want to see increased investment in services that benefit large numbers of people and particularly those that need it the most.”