Miriam Lord: What is Enda cooking up for January?

Dáil sketch: No more news on the election but prepare to count calories in New Year 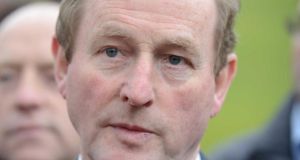 Enda Kenny: The Taoiseach said that sometimes the experts don’t always get it right. ‘A lot of older people have great experience of drainage patterns,’ he mused.

A tough day for Enda yesterday. He must have felt crushed when the realisation dawned that he won’t now achieve one of his lifelong ambitions.

He only had the two.

The first is still well within his grasp. With a strong wind, and barring an accident, he stands every chance of entering the history books by becoming the first Fine Gael taoiseach to land back to back general election victories.

The second, alas, has gone forever. He stood up in the Dáil for Leaders’ Questions, looking rather pale, and opened his mouth to speak. A terrible sound emerged. Like a distressed toad choking on a piece of dry toast.

It must have been then that golden-haired Enda finally accepted he will never be a boy soprano in the Palestrina choir. After 64 years, his voice had finally broken. A crushing blow.

The Dáil chamber looked on in alarm as the Taoiseach struggled with a long question on the health service from Fianna Fáil’s Seán Ó Fearghaíl, who was standing in for his leader, Micheál Martin.

Enda did as well as he could, while frightening the schoolchildren in the public gallery with his chesty rasp. (Mind you, if they thought that was bad, they have never heard John Bruton’s laugh. Had the former taoiseach been on the scene in Kerry last week when that little donkey got stranded in the floods, people wouldn’t have had to row out to rescue it. One blast of the legendary Bruton bray and the beast would have swum a raging torrent in search of love.)

“You must have been on Morning Ireland,” he joked across at Enda. Maybe not the wisest interjection from Barry, usually a great man for the pithy one-liners. But his brother Brian – Enda’s predecessor – might not have seen the funny side, given that his “congested” tones during a live interview on the morning after a late-night drinking session caused uproar and went a good way towards hastening his end as Fianna Fáil leader and taoiseach.

As Ó Fearghaíl pressed hard on hospital waiting lists and trolley counts, the deferred nursing strike and HSE funding, Enda rolled out the list of Government spending and achievements in the sector. But his heavy cold had also travelled to his head.

“Our plan is to abolish the health service,” he declared, in no uncertain terms. That would be an usual slogan for the election posters. It brought to mind another former taoiseach, Albert Reynolds, who once famously promised to “dehumanise the social welfare system”.

Gerry Adams, who also asked about the floods, said he’d take it easy on the Taoiseach because he could see he was sick. Enda thanked him and gave a self-pitying little cough, the way men suffering the horrors of man-flu always do.

“I went to Foxford, Ballina and Crossmolina myself on Sunday to see the impact of the flooded waters,” he told the Sinn Féin leader. He must have fallen in and caught a cold. Michael Fitzmaurice, speaking on behalf of the Technical Group, knows all about the problems farmers are experiencing because of the floods. “Can we take the bull by the horns and put one body over the rivers of Ireland, ” he asked. Whatever about that, Enda said that sometimes the experts don’t always get it right. “A lot of older people have great experience of drainage patterns,” he mused, as Fitzmaurice nodded in agreement.

Meanwhile, as the Dáil rattled through legislation before the Christmas break and most TDs ignored the chamber in favour of pre-election duties, speculation continued over the date of the election. When asked about the future of reports prepared by the Constitutional Convention, the Taoiseach said they would be considered.

Although there is nothing stopping Enda from coming back on the 13th, getting a bit of business sorted and going to the President the following day. Unlikely though.

Until this happened, courtesy of Bernard Durkan, who asked about the planned Health and Wellbeing (calorie posting and workplace wellbeing) Bill: “Given the emphasis on health and on diet control, when is the Bill likely to be brought before the House?”

Enda said he’d get back to him about it. “The calories haven’t shown up yet. It’s still cooking.”

Whereupon, a propos of calories, a smiling Ceann Comhairle turned to the Taoiseach and said: “We’d better hold on to a few for the 14th of January.”

Whatever did he mean?