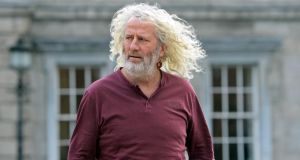 Less than a month ago – on Bloomsday to be precise – Mick Wallace stood up in the Dáil and issued a warning to Enda Kenny.

The Taoiseach wasn’t inclined to heed it. No point, he argued. Not when he has an “oversight mechanism” acting as his eyes and ears.

Had Enda been aware back on June 16th of the evidence to date at the banking inquiry, he might not have been so enamoured of our much-vaunted oversight mechanisms. Since then, nothing coming from Ciarán Lynch’s investigating committee has helped improve confidence in regulatory regimes.

Sometimes, unfortunately, they seem to miss things. But even today, after more weeks of evidence, the Government still swears by them.

In June, the Independent TD for Wexford had some worrying questions about the National Asset Management Agency, aka Firesales 2 Go, and really felt the Taoiseach should look into some of the deals conducted by Nama on behalf of the nation.

Wallace was deeply troubled by the manner in which certain major property portfolios were sold off by the agency and, while he was not levelling charges of impropriety against Nama or individuals therein, he felt certain transactions deserved further investigation at government level.

It wasn’t the first time he had raised qualms about “American vulture funds” swooping in, buying shedloads of distressed State assets at knockdown prices and quickly selling them on at enormous profits.

He thinks this stinks.

It might be a good idea to set up a commission of investigation now, reckoned Mick. Otherwise, he told Enda in the Dáil: “It may come back to haunt you in years to come.”

Last week in the Dáil, while Brian Cowen was getting all the attention for his initial turn at the banking inquiry (he’s in for second helpings on Wednesday), Wallace tried to draw attention to the drip-drip-drip of information leaking from somewhere in the Nama pipework.

And, as is increasingly the pattern in the Dáil where the dogged Wexford deputy is concerned, his misgivings – once raised – were seized upon by the two main Opposition leaders and brought to much greater prominence. On Tuesday, both Micheál Martin and Gerry Adams echoed his calls for a commission of investigation.

Enda was away in Europe, reciting his Government’s latest reworking of their Ode to a Grecian About Turn: we are in favour of “radical debt re-profiling” now.

It was left to Minister for Jobs Richard Bruton to deal with the questions over the sale of Nama’s Northern Ireland loan book, which according to the Fianna Fáil leader, “concerns the largest property sale ever on the island of Ireland, with 850 properties being bundled together and many intermediaries involved”.

This is a complicated story, but Martin and Adams concentrated on the alleged diversion of £7 million of professional fees arising from the sale into an Isle of Man bank account.

Bruton said investigations into the claims, first detailed by Wallace last week, were under way in Northern Ireland. But he didn’t see why Nama should be dragged into the controversy.

“The fee arrangement did not involve Nama in any way. These involved the buyer and not the seller.”

Furthermore, the agency is to appear before the Dáil’s Public Accounts Committee on Thursday as part of its four meetings a year with PAC. Won’t the deputies be able to ask their representatives any questions about anything they want then?

“This isn’t about a routine appearance before the PAC,” protested Martin, before he pointed out that the £7 million deposit in the Isle of Man wasn’t discovered by Nama or its auditors but by a firm which had been interested in buying the portfolio. That investment company withdrew and the loan book was sold a month later to another large US investment company with “apparently a similar fee arrangement in place”.

“This is very serious and profound stuff that goes to the very heart of whether a proper deal was done on behalf of the taxpayer,” said the Fianna Fáil leader.

Gerry Adams also wanted answers, along with the setting up of an investigation. He declared that the allegations raised by Mick Wallace “suggest insider trading and political cronyism in that sale”.

Richard Bruton remained firm on his belief that this was a situation which needed to be addressed by authorities in Northern Ireland. The “oversight mechanism” in place governing Nama was doing its job and TDs could properly ask questions when the agency is in Leinster House on Thursday.

In the back row, in the corner, Wallace clapped a hand to his brow and shook his head.

“We don’t need inquiries at every moment’s notice,” added the Minister. Perhaps he should tell this to his Taoiseach, who has shown himself very partial to setting up commissions of investigation, even when people say some are unnecessary and merely a time-wasting tactic.

The only problem with Richard’s insistence that the ultra-secretive Nama will be happy to answer anything is that committee members need to know the right questions to ask.

Had it not been for Mick Wallace, the PAC would still have been in the dark come Thursday.