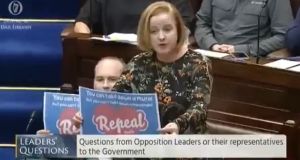 Ruth Coppinger and Paul Murphy holding up “Repeal the Eighth” posters in the Dáil on Tuesday. Image: Oireachtas TV.

While they didn’t physically recoil from the images, some TDs found them utterly unacceptable.

“Rubbish,” shouted Mattie McGrath at the offending graphics and the five miscreants displaying them. “You’re above the law!”

The Leas-Cheann Comhairle sounded scandalised. “I may have to take action,” quivered Pat ‘the Cope’ Gallagher, reacting to what he saw as an act of “deliberate” provocation.

Even the Tánaiste was aghast. When there was a break in the roaring, Simon Coveney leaned forward and, sounding like the best boy in class, he primly chided the culprits.

“Stupid stunts like that do nothing to inform people.”

Perhaps it was the way Simon said “stupid stunts” or maybe it was the prissy tone in which it was delivered, but his intervention made a lot of people giggle.

The reason for this brief outbreak of unrest during an otherwise uneventful Leaders’ Questions was the decision by members of the Solidarity/People Before Profit group to stage another of their capsule performances on the floor of the Dáil.

Having earned critical acclaim with their seminal “Repeal the Eighth Jumpers” in 2016, the group struck out with a new production this afternoon. But they were in that difficult second album territory – it was always going to be hard to recapture the moment of that first routine.

But they made a spirited attempt.

Blink and you would have missed this one. This time the five deputies – Cork TD Mick Barry wasn’t present – seemed a bit sheepish as they unfurled shocking pictures of an image which was removed from the side of arts centre on Monday as its presence compromised the organisation’s charitable status and consequently jeopardised its funding. This was because the artwork, by street artist Maser, addressed a political issue.

It features the outline of a heart in red on a blue background with “Repeal the Eighth” written through it.

“This country has an inglorious record of censorship, both artistic and political, and this parliament should be clear,” said Ruth Coppinger, “a piece of art was removed from an arts building in 2018 in a ruling more reminiscent of the Committee on Evil Literature of the 1920s.”

Quoting George Orwell along the way, Coppinger asked the Taoiseach if he believed that “that art shouldn’t argue for social change and that charities shouldn’t either”.

As she saw it, the view that this mural is outside the brief of an arts centre is a subjective one. And while this is the assertion of the chief executive of the Charities Regulator, she felt it was a subjective one because he is “someone who also has a long connection himself with the Catholic Church and a history of writing Catholic texts”.

As Coppinger spoke, the tut-tutting began at the opposite end of the chamber, where McGrath and the Healy-Raes sit. They were joined by a handful off Fianna Fáil TDs, all of whom did not agree with the Socialist TD’s argument.

She wanted the Taoiseach to review the decision to remove the mural and wondered if he could get to the bottom of how the artwork, in Temple Bar, “came under orchestrated attack, with all of the complaints being lodged on one day”.

It began to sound like a row about holy pictures. “Are we back to the old days of de Valera, when the arts had to keep to the holiest traditions?” asked Ruth.

“What was wrong with de Valera?” piped up Michael Healy-Rae (who is from a strong Fianna Fáil background.)

“Or the Catholic Church?” added his brother, Danny.

Coppinger said the Project Arts Centre did not have the funds to challenge the decision.

“The campaign to repeal the Eighth might give you a bit of money,” quipped McGrath.

The Dublin West TD called it “a remarkable double standard” that the Catholic Church could be “an active agent” in the referendum without having to register with the Standards in Public Office Commission, which secular groups must do. Many religious organisations are on the register of charities and seem to have no problem using their buildings to “propagate the anti-repeal position”.

Leo Varadkar couldn’t help her. The decision to remove the mural was made by the Charities Regulator and he presumed it did not matter whether it was a pro-choice or anti-abortion painting on the wall of the arts centre.

He wasn’t too put out by what happened. If anything, he reckoned that, because all the publicity, more people than might otherwise have been expected will see the image and read the message.

Furthermore, he threw out an interesting prediction. “I’ve no doubt that the mural will appear elsewhere, perhaps somebody who has a private building may wish to make space available for the mural to be reinstated.”

“While you can paint over a mural, you certainly can’t paint over an issue, and the issue is that nine women every day in Ireland are forced to travel overseas in order to end their pregnancies, and three women in Ireland every day – and the number is only rise into the future – are importing pills online and are taking them without medical supervision and guidance, often in their own homes.”

At the end of her second and final question, Coppinger wondered what was actually offensive in the mural.

As she said earlier, the irony of its removal was that there was a “proliferation of No posters which are offensive and upsetting”.

Paraphrasing a famous Jack Nicholson line, Mattie scoffed at her. “You don’t like the truth.”

The Taoiseach thought Maser’s artwork was fine. “Certainly, from my personal point of view, I don’t find the mural in any way offensive, but I don’t think it’s murals or posters that are going to change people’s minds or convince people on this issue.”

(That being said, he won’t be adverse to a few thousand Leo posters hitting the nation’s lampposts at the next election.)

In truth, if deputies really wanted to be offended, they could have stepped outside the Dáil chamber and walked to the main entrance. Right along the gates, almost as high as them, was a collection of the most lurid and graphic images of blood-soaked alleged foetal body parts.

The groups of schoolchildren who visited Leinster House would have had to walk past these pictures on their way in.

Some TDs may have approved of them.

Yet not of small photocopies of an innocuous piece of art.

Coppinger held up her page, then Paul Murphy, Richard Boyd-Barrett, Gino Kenny and Bríd Smith. They didn’t do it for very long and said nothing.

But they had broken the rules. People complained.

Outside the gates, there seemed to be a different set of rules.

“I believe the Maser mural will actually be more popular as a result and I believe the message young people should take from it s to use it in the referendum to win a repeal vote,” said Coppinger.

And she hoped she would be able to speak in the Dáil “and not be shouted down by a group of male deputies who can never actually be pregnant”.

No. That would be a hope too far.