From Senators in Japan and to the President’s lovely horse 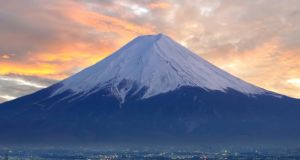 Most Senators knew nothing of the visit to ‘the Land of the Rapidly Rising Row’ until they read about it last week. Photograph: Getty

Our report two weeks ago about a select group of Senators (and one TD) travelling to Japan for a six-night luxury trip to Tokyo and Osaka has caused consternation in the Seanad and claims of interference by the Dáil in their business.

It also led to Senator David Norris suggesting a Labour Party TD “must have gone around posing as a Senator” during last week’s trip and that his Japanese hosts would “have gone mad” had they known the visiting group included an interloper from the Lower House.

The interparliamentary bilateral trip was at the invitation of Japan’s Upper House. These trips are organised according to very strict protocol – TDs only on visits to their Lower House and Senators only when the invite comes from their Upper House.

Most Senators knew nothing of last week’s visit to The Land of the Rapidly Rising Row until they read about it here.

“How could a TD have been on it – this could have caused an international incident,” huffed one of them.

David Norris broached the issue in the chamber. He got support from Labour’s Aideen Hayden who said it was disgraceful no woman was included, while Ivana Bacik said she had no advance notice of the trip, despite being Labour’s leader in the Upper House. She was in the process of making inquiries about his.

Even though the invitation was issued directly to the Seanad, “a member of the Lower House was foisted on this group by the Labour Party” fumed Norris, as he wondered if Deputy Jack Wall had passed himself off as a Senator.

“How did that happen? Did the Japanese know about that? It must have been a considerable source of embarrassment.”

It now seems Labour’s chief whip may have had a hand in the decision.

“If someone like deputy Emmet Stagg sticks his nose in again, I hope he will be properly told by the Cathaoirleach to bugger off.”

Norris added that if he doesn’t get a satisfactory explanation “I will write to the Japanese ambassador to advise him of this insult to the Japanese parliament. I know how they feel about these kind of issues of protocol.”

Having discussed this outrage with colleagues on all sides, Senator Bacik said it should be put on the agenda for the next meeting of the Committee on Procedure and Privileges. “Perhaps we will have cross-party support for it.” That’s a given.

Government politicians have gone to the dogs

After some of the antics in the chamber this week, few would argue with the conclusion that Dáil Éireann has gone to the dogs.

Although some members have gone far further than others.

An all-male syndicate of 14 Government politicians has invested in a greyhound bitch and Swift Starlet has already notched up five wins for them in her short career.

Ministers Michael Noonan and Phil Hogan are among the group which was put together by Meath West TD, Ray Butler from Trim.

“Greyhounds are in my blood,” Butler told us this week after he returned from ‘A Show of Passion’ in London.

Irish developer Paschal Taggart, who has put together a consortium proposing a development which would retain the stadium, was also at the event.

Deputy Butler says ‘A Show of Passion’ was not a protest, but an expression of thanks to London mayor, Boris Johnson, who says he supports the local residents’ campaign to save the last remaining dog track in London.

Wimbledon track, by the way, is owned by Nama.

Ray delivered a letter to the mayor from a cross-party group of Irish parliamentarians and it was accepted at City Hall by deputy mayor, Sir Edward Lister.

“In the letter, I extended an invitation to Boris to come over and see the success story that is Shelbourne Park” says Ray.

“And if he came over, I’d also show him the Book of Kells, John’s Castle in Trim and bring him into to the Dáil.”

As for Swift Starlet and her owners the Óir Syndicate, she’s resting up in Slane after a big win last month.

And speaking of Dáil Éireann going to the dogs, has the Ceann Comhairle resigned yet?

Last month, in the middle of yet another shouting session during Leaders’ Questions, he thundered: “If I do not have the confidence of this House to run this chair, I intend resigning. I am not going to come in here day in and day out and be ignored by either the Government or the Opposition.”

Leo will speak his mind and maybe even in verse

We see the Hibernian Society of Savannah is not bothered at all by Eamon Gilmore’s decision to skip its annual St Patrick’s Day dinner last year because it is an all-male event.

While the society made a big play out of not inviting the Tánaiste to their beano, Gilmore had already ruled out a trip to Savannah because of the men-only dinner before the invitations went out.

The society’s website showcases a nice poem on the homepage which, as might be expected, is all about The Old Sod. (Or Tánaiste Eamon Gilmore, to you and me.)

It’s by Edward T Brennan, “Poet Laureate of the Hibernian Society of Savannah”.

Leo Varadkar is due to visit Savannah on his St Patrick’s week odyssey around the American deep south and says he will attend the men-only function if asked. He thinks these type of men-only affairs “belong to another age” and adds: “I will certainly make my views known.”

Perhaps you can do it in verse.

The snub
I didn’t attend their party, no.
I know it was cruel of me
But they wanted a good shaking up
By a noted Celebrity


Their ideas are old fashioned and dated
They’re trying to live in the past.
Their snugness needed a jolt
And I hope it won’t be the last


What, they say I wasn’t invited
And they’re puzzled by my rail?
Surely an invitation was sent to me,
It must have got lost in the mail!

President Michael D Higgins visited the National Stud this month and ended up falling in love with a frisky young filly.

Michael D’s lovely horse can be found at trainer John Oxx’s yard, which is just down the road from the National Stud and Japanese Gardens.

“The National Stud have retained a nice filly to go into training. She will be running in the colours of the President, which is always very nice,” Oxx told the online channel Irish Horse TV.

”She looks very, very well – beautiful. Lovely temperament, good line,” said the President when he dropped in to see her.

And does Our Lovely Horse have a name?

The president has decided she should be called Aimhirgin Lass.

Aimhirgin was Ireland’s first ever poet. (Letters to the editor if you know any different).