Miriam Lord: Repealing angels have something to hide at Leinster House 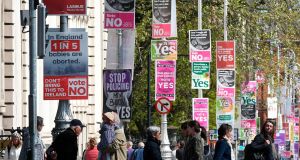 A flying column of angels arrived at the gates of Leinster House just in time for Leaders’ Questions.

They stayed outside. The Dáil is no place for angels, even if some of the politicians who inhabit it could give them lessons in how to dance on a pin.

Large of feathery wing, they marched whiteously up Kildare Street and flapped into position near the wide pavement’s edge. The women formed a third line of silent protest in front of a back row of hugely magnified and luridly enhanced images of foetal remains. It was a strange scene.

Representatives of a Tipperary-based group called the Irish Centre for Bioethical Reform (ICBR) – an offshoot of an American anti-abortion organisation – had lined up against the railings and put these giant banners on display.

In front of them two young men held up a large rainbow flag, partially obscuring one graphic image. Two more beside them were shaking out what looked like a bedspread in advance of lifting it into position. Members of the Students Union of Ireland had hoisted a long banner in front of another blown-up print. Some Sinn Féin staffers came out and held up the letters Y-E-S, further eclipsing the repellent displays.

And ahead of them stood the young women with the angel wings, wearing red “Repeal” hearts over their own hearts, further distracting from what was going on along the back wall.

There has been a cat and mouse game around Dublin city in the past few weeks between the ICBR silent protesters and a stalking group of similarly silent protesters dedicated to blocking the abortion images they have been hawking around places like maternity hospital entrances.

Back outside Leinster House, the anti-abortion campaigners also produced two smaller posters in an effort to thwart their determined adversaries. They started screwing aluminium rods together, like they were going to assemble a gazebo, until they had poles long enough to shove their bloodied images higher than everything else.

“If this wasn’t so awful, it’d be very funny,” remarked one onlooker.

What with the hoisting activities, the horrible images, the camouflaging efforts, the rosary beads women on the periphery, the earlier arrival of an amiable group of Grandfathers for Yes and the later turnout of angels, the photographers and TV camera people were delighted.

Just over a week to go now to polling day. As TDs entered their penultimate week in the Dáil before the vote you could sense the atmosphere becoming a little more strained, emotions a little more heightened.

There was much talk around the corridors about the previous night’s referendum debate on Claire Byrne Live, the conduct of which dismayed quite a few proponents of a Yes vote, who felt the anti-abortion panellists, with the help of very vocal and passionate supporters in the audience, had steamrollered their pro-choice opposition with a combination of confident answers and a crushingly combative style.

On the other side – and the Dáil has a very substantial number of TDs who do not support repeal – there seemed a definite change of mood. They had a pep in their step and radiated a quiet satisfaction.

One of the main reasons the repealers were feeling sore was because they felt obstetrician Prof Peter Boylan was “taken out” of Monday night’s debate by what they perceived to be a concerted onslaught of criticism and contradiction from the anti-abortion side.

On the other hand, Independent TD Mattie McGrath, a leading light of that campaign, was not letting up on the charge started on television the night before. He also zoned in on the what he called inaccurate claims by medical experts, referencing a call by a number of doctors in the South/Southwest Hospital Group for Prof Boylan to step aside from his position as chairman of the Institution of Obstetricians and Gynaecologists.

He said that for the past two weeks two of the country’s senior medical professionals have been “endlessly repeating dangerous and reckless comments” in the referendum debate but “the Taoiseach will not stand up to them because they support his view in the upcoming referendum”.

For his part, Leo Varadkar said he had hoped the debate would not become personalised, and until now it had remained largely respectful.

“I deeply regret that some people have now chosen to try to personalise the campaign in regard to Dr Peter Boylan. Dr Boylan has the right to his view, just as doctors or former judges on the No side have the right to their view.”

McGrath took umbrage at “a grossly offensive” remark by the Taoiseach last week where he said people who oppose repealing the Eighth Amendment were “turning a cold shoulder” to victims of sexual violence. This, he declared, was untrue and unfair.

Varadkar noted how McGrath raised the issue of care and compassion, saying he had yet to hear from anyone, including the aforementioned Deputy, about how they care for and show compassion for the victims of sexual violence he had just mentioned.

Victims “such as a 13-, 14- or 15-year-old girl who may have been raped by her father, grandfather or uncle, and is bleeding and in pain. What answer does the Deputy offer her?”

The independent TD for Tipperary didn’t really have one.

“You have no right to lecture us. We have compassion. Many organisations and agencies which I support assist victims of sexual violence on an hourly basis. We want more compassion, not the taking away of the last vestige of support for the unborn child – not a foetus – in the womb. We wish to maintain life from conception to end of life.”

But they don’t want her to have the choice to end that pregnancy.