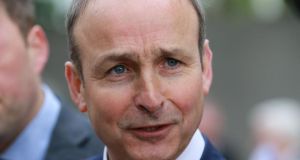 TDs were in no doubt about their first item of business this week. It involved a change to the usual running order. There was no argument about it.

An almighty procedural row blew up a little later, but that was on a different matter.

On the occasion of the death of Gay Byrne, the Dáil was unanimous in its wish to pay tribute to Ireland’s all-time favourite broadcaster before giving consideration to anything else.

Sometimes our parliamentarians are slow to catch on to the public mood, often far too many cautious steps behind what the public has been thinking for a long time.

Beginning with business as usual on Tuesday was not an option.

A book of condolences was placed in the main lobby of Leinster House, a rare occurrence. It last happened in June 2016 after the murder of the British Labour MP Jo Cox.

The Ceann Comhairle led the way. Seán Ó Fearghaíl deemed it “appropriate” that Dáil time be given to join the “national outpouring of respect and recognition – respect for the colossus that Gay Byrne was on the world stage of public service broadcasting and recognition for the role he played as a catalyst in the evolution of Irish society over the past 50 years”.

He was followed by a succession of party and group leaders echoing familiar sentiments and memories expressed by so many since Monday’s sad announcement. Taoiseach Leo Varadkar expressed condolences on behalf of the Government.

Of all the leaders who spoke so warmly of the man universally known as “Uncle Gaybo”, Fianna Fáil leader Micheál Martin put it best, astutely observing “he was, perhaps, our original Citizens’ Assembly”.

The truce in honour of Gay then gave way to the knockabout hostilities which so exasperated the broadcaster when he was behind the microphone.

Hospital overcrowding would have been another bugbear. And it’s still a burning issue in today’s Dáil.

Sinn Féin leader Mary Lou McDonald asked the Taoiseach to “imagine” what it would be like if he was sick and had to go to hospital today. Imagine how worried he would be and how worried his family would be with the thoughts of him having to go into a hospital creaking under the strain and pressure.

“Upsetting and terrified” is how Mary Lou imagined it would be for him.

Leo condescended a rather sniffy reply.

He didn’t need to imagine any of her scenarios. “I am a doctor by profession” he declared, outlining his years (seven) working in the public health service. Not to mention his time as a minister for health. Which he did, even though it isn’t a topic he should be boasting about.

Nonetheless, Dr Varadkar doesn’t have to be told by the likes of Mary Lou or anybody else about conditions in emergency departments for staff, patients and their families. He’s known about it for years and years, man and boy.

“We are making every effort to improve the situation,” said Leo “Trust me, I’m a doctor” Varadkar.

He isn’t the first doctor to become minister for health. Remember James Reilly? Others too in recent times such as Rory O’Hanlon and John O’Connell – and three times health minister Michael Woods (although he was a doctor of horticulture, specialising in tomatoes).

We ran our eye along Tuesday’s Cabinet turnout to see if the jobs match the portfolios, the way Leo’s does, ignoring the fact that he was no great shakes in health.

Next to him, Tánaiste and Minister for Foreign Affairs Simon Coveney. Transatlantic yachtsman. Fair enough.

Then Josepha Madigan, Minister for the Arts and a solicitor. A profession which, given some of the court reports of insurance claims, could certainly claim an affinity with the creative arts.

Eoghan Murphy, Minister for Housing. He worked with a variety of NGOs in “international arms control” and in the area of nuclear disarmament. Which is slightly worrying in this massive housing crisis.

Richard Bruton, economist and Minister for Communications. Because economists are great at communicating.

Joe McHugh, Minister for Education, a teacher. Charlie Flanagan, Minister for Justice, a solicitor. Is this the Taoiseach’s simple method for selecting Ministers?

Good in theory, not so good in practice.

The method of selecting motions for debate is far from simple. It caused absolute ructions in the chamber during the Order of Business, which happens straight after Leaders’ Questions.

Richard Boyd Barrett of Solidarity-People Before Profit was fuming. His group’s motion to change standing orders, another name for the rules of the House, was down for discussion on Wednesday evening but thrown off the schedule at the last minute by the Ceann Comhairle’s office.

This is an interesting one. It concerns a thing called a “money message”. It was put into the Constitution by Éamon de Valera to ensure that the Opposition can’t wrest control of the national coffers from the Government. If the Opposition devises legislation which makes a call on State funds, it cannot proceed unless a money message signed by the Taoiseach is forthcoming.

In a piece in The Irish Times in June, former clerk of the Dáil Kieran Coughlan wrote that the Fine Gael government’s use of this money message to block opposition Bills was “unprecedented” in the last 50 years of the Dáil.

So while the Government crows about the openness of new politics and how so many opposition private members’ Bills are being accepted and discussed and voted upon, most of them crash on the rocks of this little-known rule.

If Boyd Barrett was incandescent, his colleague Bríd Smyth was a conflagration. How dare the Ceann Comhairle stop them introducing their Bill to prevent the Government abusing the money message?

Sabotage was mentioned several times. It was “at the very least, shoddy” and at the very worst “totally undemocratic” railed Smyth.

The Ceann Comhairle wasn’t entirely unsympathetic but he said he was acting on the advice of the Clerk of the Dáil and the parliamentary office.

He had to suspend proceedings, declaring he wouldn’t be bullied, as Boyd Barrett and colleagues roared in protest.

“Seriously. What is the point of this charade?” he asked, disgusted. “This place has brought itself to a new low.”

Through all the upheaval, the Taoiseach calmly studied his phone or made notes on his folder. Not in the least bit moved.

His Government is playing fast and lose with this rule because it can. It’s lousy and everyone knows it.

It’s probably too complicated to bother the voters, though. And that’s all that matters.