Miriam Lord: No tanks on Leinster Lawn but revolution close to seat of power 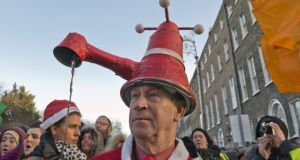 On tap: John Carter from Drogheda, Co Louth, who was among the tens of thousands at the water protest in Dublin. Photograph: Brenda Fitzsimons

The revolution arrived at lunchtime, and if it didn’t quite manage to park the tanks on Leinster Lawn, it rolled them up within earshot of the corridors of power.

Too close for comfort? Not really. Kildare Street was closed to traffic – pedestrian and vehicular – for the duration of yesterday’s protest. For politicians who ventured to the gates for a look, there was nothing to see.

But the distant shouts of protesters and the agitated barking of police dogs reminded them that all was not well outside their political compound. Had they strolled down to the junction with Nassau Street, they would have witnessed a small but noisily foul-mouthed group of protesters squaring up to gardaí across the barriers. Their loutish and menacing behaviour was in contrast to the mood at the main demonstration in nearby Merrion Street, where it was festively rebellious.

The Garda were taking no chances, checking the ID of workers before letting them into Kildare Street. One victim of their strict policy was Kerry Senator Ned O’Sullivan, who found himself on the wrong side of the barriers with an officer refusing to let him continue on to Leinster House.

“I’ve never heard of you,” said the garda. “I’m famous for the seagulls losing the run of themselves,” explained Ned. And he got through.

Around the other side of Leinster House on Merrion Street, a large stage with big screens had been erected next to the main entrance. For a midweek event on one of the coldest days of the year, the turnout was impressive. Maybe as many as 35,000 but nowhere near the figure of 100,000 being bandied about by the organisers.

And who organised the protest? The Right 2 Water campaign, apparently. Although that’s not how it looked. Looking across from Leinster House, above the perimeter wall, the scene looked for all the world like a republican rally with a green forest of Sinn Féin flags flying from the rows nearest the stage, augmented by Sinn Féin cumann banners, giant tricolours and Éirígí flags.

Out on the ground, at the start of proceedings, Gerry Adams and a number of his TDs, accompanied by the party press officer and officials, materialised at the head of the crowd on the pavement. A fluorescent garda line barred their progress.

The smiling Adams had a few words with a smiling senior officer, who waved them through to the unoccupied half of Merrion Street. The group made their way backstage where their TDs and MEPs had congregated.

Much to their chagrin, independent deputies Michael Healy-Rae, Noel Grealish and Mattie McGrath couldn’t get backstage. They contented themselves by taking photographs of each other with the crowd in the background.

“I can’t get in there,” grumbled Mattie, cocking a finger in the direction of the Sinn Féin contingent doing media interviews. “They all have ‘Access Enclosure’ passes for the restricted area.”

It was a bit like a rock concert in that regard, and as it turned out, two performers topped the bill above the rest of the speakers. Gerry Adams and Mary Lou were cheered to the heavens by the crowd, a large proportion of which had been bussed in by the party from all over the country. Some even came from the Aran Islands.

If Sinn Féin lost ground to the hardline left on the water issue in October, it was clear the party was out to claim/reclaim the issue yesterday. They did it with some style. This will have put more than a few noses out of joint among the likes of Paul Murphy, Richard Boyd Barrett and Joe Higgins.

This was their day – or it should have been: citizens on the streets in ferment, a mass protest movement demonstrating at the gates of power, a proper mobilisation happening in full glare of the media with battalions of police watching on and a Government on the back foot over water charges.

It had taken years of graft (and a woeful catalogue of calamity from the Government) to get them here.

Back in October, when Murphy surprised Sinn Féin by winning the Dublin South West by-election, the fervour with which he and his mentor, Joe Higgins, went about their campaign was striking. They told voters that another government had tried to introduce water charges and “people power” forced them to abandon the idea.

Murphy and Higgins fully believe this can be done again. Whereupon the people, realising their own strength, will continue to protest until the Government is overthrown. Their revolution has started. They are daring to believe it.

And just when the new dawn is beginning, a different movement sweeps in. It must be galling for the old radicals. But they had a good day of it yesterday nonetheless. Had the assembled cast been any further to the left they would have been speaking from Hollyhead. Emcee for the occasion was Brendan Ogle of the Unite union. It would be an understatement to say IBEC wouldn’t be on Brendan’s Christmas card list. And mention Denis O’Brien in his presence and he’ll have a fit of the vapours.

Mind you, billionaire Denis’s ears must have been burning. He was name-checked quite a few times from the platform, drawing loud boos from the crowd each time. Ogle was loving it – bouncing around the stage, pumped up and bigging up the speakers and acts like a veteran rocker at Glastonbury.

There had been much talk of a mystery guest appearing at the end of the three hour rally. Christy Moore, suggested some. Sinead O’Connor, said others. But none of them turned up. There was, however, a bracing rendition of The Aul Triangle from Glen Hansard and Damien Dempsey which kept the cold away for a few minutes.

The “sinister fringe” figured in a lot of contributions. This was the description applied by some politicians to the people who trapped Tánaiste Joan Burton in her car for two hours in Tallaght recently. No sympathy for her ordeal in Merrion Street.

“The sinister fringe is back there,” said a speaker from Edenmore Says No. “There’s buckets of them in there: gombeens, shoneens and men ready to sell everything off to the lower bidder.”

Brian Leeson from Éirígí – the hardline republican socialist group, shouted: “We don’t need an election. We need a change of system; an Irish revolution. It’s our country. It’s time to take it back.”

James Connolly got lots of mention, along with 1916.

“This is real democracy - people power,” declared Gerry Adams, who was greeted with chants of “Gerry, Gerry, Gerry!”

Mary Lou McDonald was similarly feted, posing for selfies with fans, very much in demand. But Clare Daly and Richard Boyd-Barrett and Paul Murphy did their bit to boost the decibel level and hasten the revolution. “We have the power to bring down the Government,” said Murphy.

They’ll have a chance to do it on January 31st, when the next march happens.